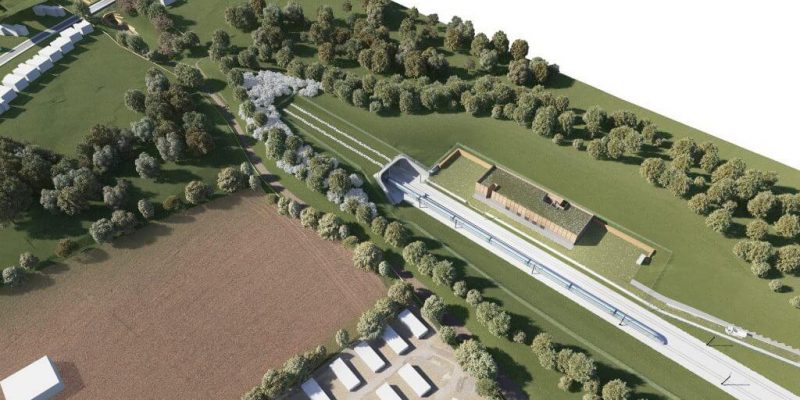 The new designs for a cut and cover tunnel at Burton Green and a greenway in Kenilworth, Warwickshire have been published by HS2.

A green cut and cover tunnel with 400m length, which is due to be blended into the available landscape, will be the passing path of the High Speed 2 (HS2) railway at Burton Green.

In November 2019 the community feedback has been received, hence HS2 contractor Balfour Beatty Vinci has been working with the local authorities to extend the design of the HS2 route through Burton Green.

In order to construct the green tunnel a cutting will be done along the line of the existing Kenilworth greenway, as well as building a tunnel box that includes a roof, while the cutting will then be backfilled with soils to recreate the landscape and conceal the tunnel.

The considered location for the construction of the south tunnel portal and the portal services building is in a bowl-shaped landscape, planted with trees and shrubs.

Moreover, a green roof will be built for the portal building, which provides emergency access to the tunnel.

Decreasing the quantity of land required and allowing existing vegetation to be protected, preserved, and enhanced, the railway is going to expand north of the green tunnel in a retained cutting.

Additionally, HS2 Ltd will realign the Kenilworth Greenway, a 6.5km linear country park which presents a pedestrian link from Burton Green to Kenilworth and Berkswell, whereas, it has barred a large section of the greenway to commence the construction of the tunnel at Burton Green.

In order to create biodiverse habitats for wildlife, shield the park from the new railway, and re-establish vegetated connections to Black Waste Wood and Little Poors Wood, the extra activities in greenway will include large-scale planting of native trees and shrubs.

According to HS2 Ltd senior landscape design manager Steve Fancourt: “Our designs show how we will ‘drape’ the landscape over the tunnel by placing soil to conceal the tunnel roof to support new native woodland planting, reconnected wildlife corridors, and new public footpaths.”

Mott Macdonald, Balfour Beatty Vinci landscape design director Shaun Ruffles noted the significant importance of green space around HS2. He said: “The design for the permanent realignment for the Kenilworth Greenway and the landscape infrastructure created over the green tunnel is central to how we deliver this.”

Despite continuous operations on the railway’s construction process, HS2 has provided a temporary pedestrian route for the Kenilworth Greenway, which begins at the site of the new Burton Green Village Hall and follows the existing field boundaries.

Contribution of the designs for the Burton Green tunnel and Kenilworth greenway with the local community, has been done, while HS2 Ltd’s next plan, which is going to increase the length of the Bromford tunnel near Birmingham from 2.8km to 5.7km on the HS2 phase one route, has been submitted in January.