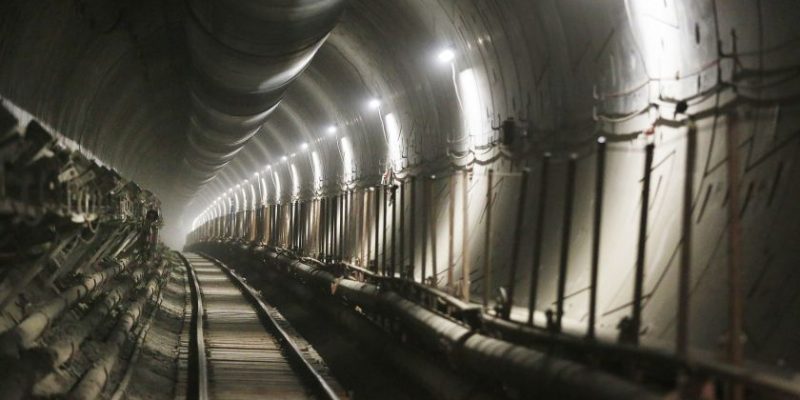 On Section 1 of the Metro D Line (Purple) Extension project in Beverly Hills, Los Angeles Metro reported that its first TBM, ‘Elsie,’ has broken through into the Wilshire/La Cienega subway station. It’ll be the first of two TBMs to arrive at this final station.

The first 6.4km (four-mile) portion of the subway project’s tunneling is now two-thirds complete. More than 90% of the tunnels have been mined successfully, and Metro expects tunnel boring to be completed this summer. The three subway station boxes under Wilshire Boulevard have also been excavated.

Metro has achieved a major victory by reaching this landmark. Section 1 of the project tunneling posed obstacles that the project successfully overcame. The agency’s TBMs bore through a complex mix of soils and geologic environments en route to Wilshire/La Cienega, including tar sands and methane gas.

In October 2018, Metro’s TBMs were first lowered into the ground at the Wilshire/La Brea station in Wilshire’s Miracle Mile neighborhood. The TBM progressed at a rate of around 20 meters (60 feet) every day. They served 20 hours a day, five days a week.

TBMs from Metro are closed-face, pressurized devices that reduce ground settling during excavation. The tunnel is lined with a ring of precast concrete segments that have been bolted together. Segments are often gasketed to keep water and gas out of the joints between them.

The first portion of the project will be designed and built by Skanska Traylor Shea (STS), a joint venture.

The $9.3 billion Metro Purple Line Extension is a 14.4-kilometer (nine-mile) underground subway network that will connect Korea town and Westwood/VA Hospital in West Los Angeles. The first section will be finished in 2023, the second in 2025, and the third in 2027.