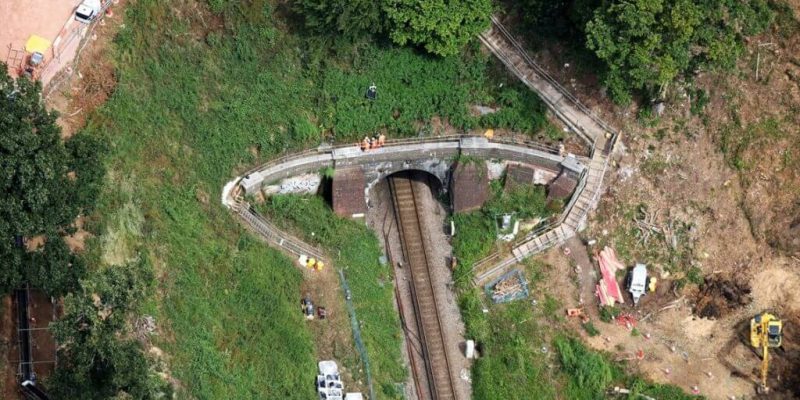 In order to prevent landslides on a stretch of railway line in Hampshire, an engineering project with a £2.28M value has been completed.

Locating among Eastleigh and Fareham, the South Western Railway (SWR) line was closed between 24 June and 3 July to allow Network Rail contractors to carry out the works.

Due to its deeply cut into the hillside, the railway cutting near Fareham tunnel is particularly steep, which raises the risk of landslides that can be caused by earth movements in extreme weather.

Benefiting 20 construction vehicles and 10 trains, the contractors dug 5,000t of earth from the steepest side of the cutting in order to make the sides of the slope shallower. Then they built an 80m long retaining wall along the side of the slope.

While hundreds of workers were on-site for 7,500 hours during the closure, they also completed maintenance work to improve reliability, including work on the track, switches, crossings, electrical, signaling, and drainage.

According to Network Rail’s Wessex route director Mark Killick: “We appreciate that closing the railway for a week was disruptive, especially on the back of the recent rail strikes, but this job was absolutely vital to keeping the line open and safe in future.”

He also added: “To make the most of the access to the railway, we also completed more than 30 extra jobs, from routine inspections to important track maintenance, ensuring we handed back a more reliable line. I’d like to thank our customers and our railway neighbors for their patience while we completed this major work.”

In 2014, a landslide on the line at Botley closed the route for six weeks, with 80m of embankment needing reconstruction.

Deferring the Cumbria Coal Mine Decision