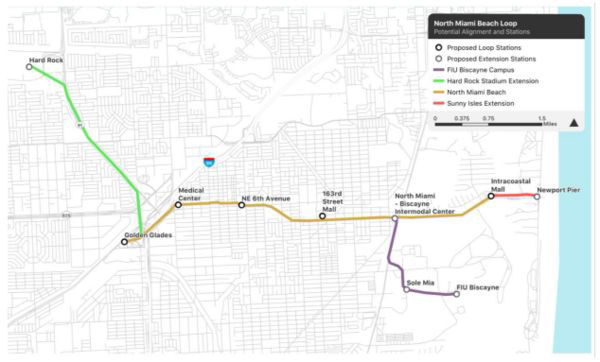 In order to construct another loop tunnel, this time around North Miami Beach, Elon Musk’s The Boring Company is looking for a confirmation.

Locating among Golden Glades Transit Center and Sunny Isles Beach at Newport Pier, the intended tunnel with 6.2-mile length, would include seven stations and be able to transport more than 7,500 people per hour.

While this tunnel’s construction process is estimated to take less than three years, the scheduled cost is US$185-220m.

In addition to this, the scheme that has been submitted for regulatory approval, lets for the option to add extensions to the North Miami Beach Loop that would include connections to Hard Rock Stadium and Florida International University’s Biscayne Campus.

Tesla vehicles have been used by the Boring Company’s loop systems to transport passengers.

Inauguration date of the 1.7-mile-long Las Vegas Convention Centre loop was the previous year, whereas currently the work is undergoing on the Vegas Loop and earlier this month the TBM broke through at Resorts World, laying the groundwork for the loop’s first station. Comprising of 51 stations along The Strip, the Vegas Loop tunnel network with 29-mile length is also due to serve the Allegiant Stadium and the University of Nevada. The anticipated daily passenger transporting number by Boring Company is up to 57,000.

Additionally, according to Bloomberg’s report the company has also been given the go-ahead to build a tunnel research and expand site at its headquarters near Austin, Texas.