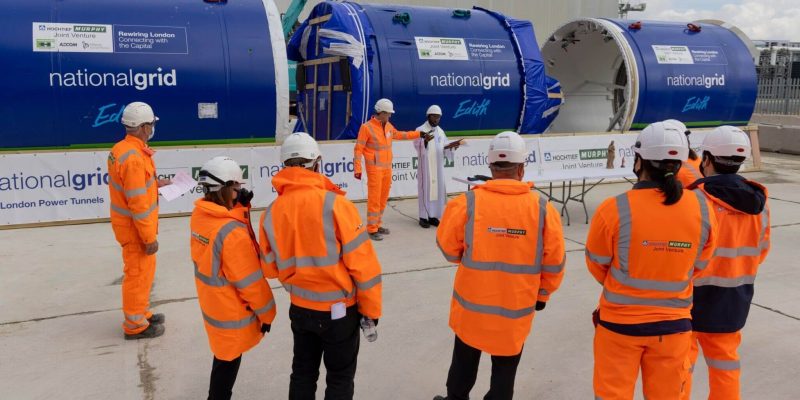 According to Mott MacDonald senior tunnels engineer David Naylor: “The National Grid’s London Power Tunnels phase 2 project will deliver most of its tunneling work next year with all its TBMs now launched.”

In order to rewire south London project, which’s value is £1bn, all of the four TBMs in the ground and mobilized six out of eight of its sites as Naylor announced at NCE’s Tunneling Festival on 8 December, while he acclaimed that the coming year is going to be LPT2’s year of tunneling, with a huge pipeline of works going forward.

The estimated date for completing the tunnel from Hurst to Eltham is July 2022, while its construction process was commenced in June 2021, as well as the tunnel that has stretched from Hurst to Crayford, is planned to be constructed between July 2022 and February 2023.

In advance, the completed length by the project’s TBMs is around 4km of 3m diameter tunnels.

TBM Caroline has dug a 1.2km tunnel from Kings Avenue in Clapham, TBM Edith has dug 500m from Bengeworth Road in Brixton, TBM Grace has excavated 70m from New Cross, and TBM Christine has dug 450m from Hurst substation in Bexley.

The determined depth for the tunnels is range among 12m and 63m.

Breaking through the four out of eight TBM shafts has been done and it will pursue by the project team until January 2022.

Naylor also added: “Two very busy years of tunneling in 2022 and 2023 will be followed by a year of cables being installed, and then sorting out all the interfaces beyond that, which goes to about 2025.”

The scheme, which will provide circuits that enable power distribution across the south of the city, will be running two circuits up to 400km along the route.

Additionally, from April 2023 to April 2024 the construction of the substations and headhouses, that is a building that covers a shaft that will link to the network of cables, will also be implemented.

The contract for the design and build of the tunnel network has been granted to Hochtief Murphy JV as part of a £400M joint venture contract in December 2019, along with other five contracts for the scheme.

Naylor asserted: “This is all 3m tunneling works; it is confined work that requires specialist people, although he added that all project partners were working together to minimize the risks associated with that form of tunneling and trying to create an environment that is best for the workforce. The pandemic was also a massive challenge for the team.”

“Most of our tunneling work commenced around January 2020. So, we had the slight issue of the global pandemic, and Brexit hasn’t made things particularly easy for us either. But we’ve kept on going,” he added.

The anticipated time for finishing whole project is the 2026.