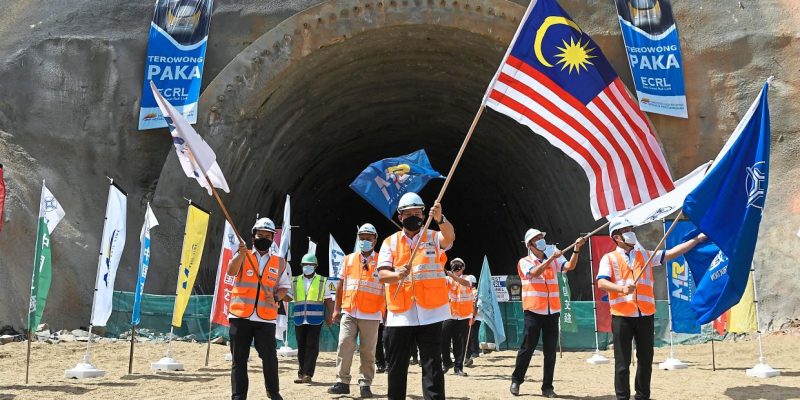 Despite the challenges faced by the project during the past three years, an early tunnelling breakthrough has been achieved six months ahead of the plan on Malaysia’s ECRL (East Coast Rail Link).

As the chairman of Malaysia Rail Link (MRL), Tan Sri Mohd Zuki Ali stated, the use of drill and blast achieved ‘quick and efficient’ boring which followed in the better-than-expected progress on the country’s 1.1km-long Paka Tunnel in Terengganu. However, single track and single bore, the tunnel’s width of 12.9m will enable a double-track configuration in the future.

The excavation has started in April 2018 at the north portal yet was interrupted a few months later by a renegotiation of the project by the Malaysian and Chinese governments which was brought about by a change of the country’s federal administration. Eventually, the work restarted in August 2019 but was to be interrupted by the Covid-19 pandemic, leading to a further nine-month delay to the project.

The main contractor of the project is China Communications Construction Company, with blasting work through the chiefly moderately weathered granite undertaken by local explosives experts.

The Paka Tunnel is going to ease the flow of freight services and passenger travelling across the Malaysian peninsula between Port Klang and the state of Kelantan in the northeast of the country. Civil works are anticipated to be finished by the first quarter of 2022. Breakthrough on a second ECRL tunnel which is located in Dungun, Terengganu is anticipated in June 2021.

The ECRL project which is 665km long includes 59 tunnels totaling 14.9km in length, many of which are presently under various stages of construction.