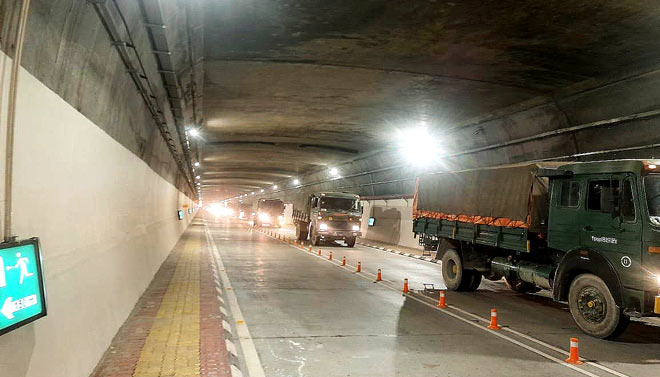 By Tunneling admin
Share
After the inauguration ceremony held on Oct. 3rd by Prime Minister Narendra Modi, an army convey made a pass through the Atal Tunnel on Oct. 7th. The strategic corridor stretching for 9.02 km, cut the travel distance by 46km and travel time by four to five hours between Manali-Lahaul Union Territory of Ladakh.
Rohtang’s valley was not accessible six months before the highway was built, although now a permanent traffic flow is ensured through the road link within the Himalayan Mountains.
“I do not need to explain the importance of this tunnel. Its strategic importance is understood by everyone. It will ensure speedy and faster transportation of rations, weapons, and other logistics. It will also help in faster deployment of personnel. Situated on the border of two nations, it is dedicated to those protecting our borders, and those who live in those areas,” explained Defense Minister Rajnath Singh.
According to him, this highway plays a critical role in defending India from outer invasions.
—————————————-
References
Atal Tunnel Awaits Inauguration Ceremony Soon – Tunneling World, Sep. 2020
Rohtang Project: Tunneling underneath Rohtang Pass almost completed – Tunneling World, Aug. 2020