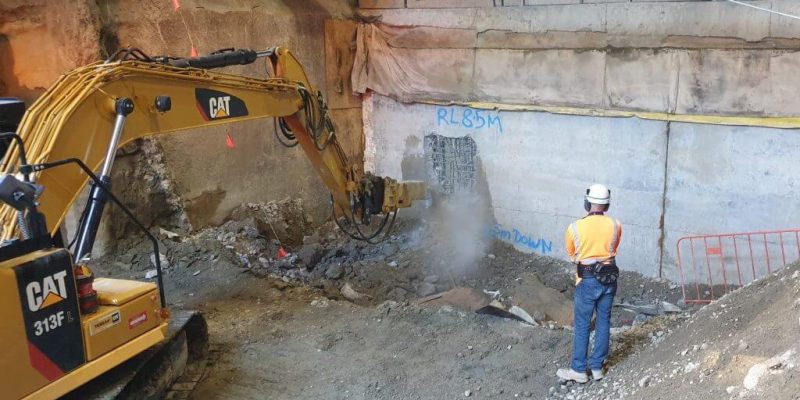 Among new Aotea Station and tunnels dug from Britomart Station 15m beneath a busy street in Auckland, New Zealand, City Rail Link has reached a breakthrough.

The breakthrough under the intersection of Albert and Wyndham Streets joins twin tunnels, completed in early 2020 from Britomart Station and under Commercial Bay and Albert Street, with Aotea Station, which is expected to become the country’s busiest station when City Rail Link is fully operational.

According to City Rail Link Ltd chief executive Sean Sweeney, the tunneling process of a 300mm thick by 10 December, was a huge step forward for the work.

“The wall’s removal took about two weeks. It was careful work connecting two separate sections of the project, and, at the same time, doing that without disturbing roads, walkways, shops, and offices just a few meters above us,” stated Francois Dudouit, project director for the Link Alliance, City Rail Link’s main contractor.

Equipment the tunnels as well as preparing them ready for the installation of rail track and rail systems, is made possible by joining the tunnels and station.

The scheduled date for completing the foundation work for the entire station at Aotea is before the Christmas break, while over 400 bored piles and 140 diaphragm wall panels will have been constructed until then and a large section of the station roof has also been built, with the digging of material per day.

Stretching under Albert Street, from the Wyndham Street intersection south to the Wellesley Street/Mayoral Drive intersection, the Aotea’s footprint is 350m long.

At Aotea’s southern leg, ultimate preparations are undergoing to host the project’s tunnel boring machine (TBM), Dame Whina Cooper. The intended TBM’s drive had commenced in May from the project’s Mt Eden site through the mined tunnel for the Karangahape Station and into central Auckland and currently, it is almost finished.

While the next success at Aotea is due to be the final connection in the first of two tunnels extending the full 3.45km of the line between Mt Eden and Britomart, in order to be prepared to bore the second rail tunnel in 2022 the TBM will be returned to Mt Eden in sections and reassembled.

Disassembling the TBM Back Office Gates, a Diaphragm Wall and a Blind Tunnel in Świną Tunnel Project