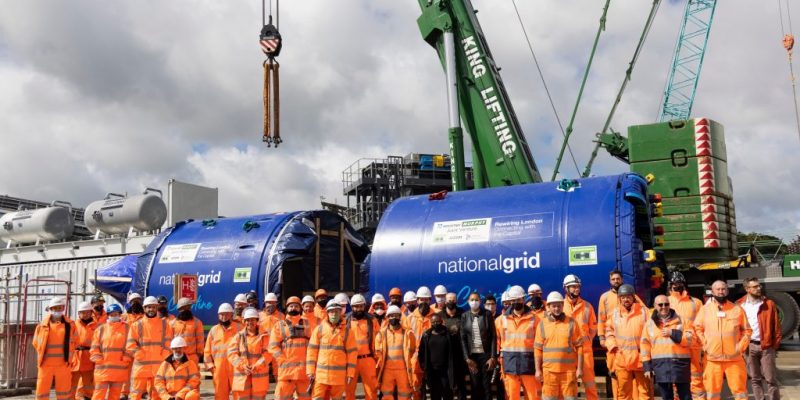 A landmark moment for National Grid’s London Power Tunnels project_ it has started up its second tunnel boring machine (TBM), following delivery of the machine on site.

The TBM, by the name of Christine after construction variety and STEM champion Christine Townley who was executive director of the Construction Youth Trust, is going to be used by contracting joint venture Hochtief Murphy to drive the tunnel from Hurst to Crayford. A tunnel, which has 32.5km length and 3m diameter and will be dug beneath the south London between Wimbledon and Crayford with £1bn value to upgrade the area’s power network, is the project that includes the aimed tunnel.

While the delivery date of the project’s initial TBM, named Edith, to site in New Cross was in May this year, Townley was the guest of honor at a ceremony earlier this week to name the project’s second TBM as it arrived on site. Also weight of the Herrenknecht earth pressure balance TBM was 140t.

National Grid London Power Tunnels project director Gareth Burden said: “[The ceremony] marked another milestone for the London Power Tunnels project which is picking up momentum as we connect our sites across South London. It was a great privilege to host the inspiring Christine Townley and all our guests at the event and talk about our investment in the local community through our partnership with MyKindaFuture. The program is part of our ambition to address the lack of social mobility across the UK and the resulting skills shortage in STEM orientated industries, which has been a core part of Christine’s work.”

He also asserted: “This project is essential for securing London’s electricity supply well into the future, and this has meant adapting and working throughout the Covid-19 pandemic. I would like to thank all the staff at the site again for their efforts in ensuring that the project continued to go ahead despite a global pandemic.”

“I am so honored and flattered that the London Power Tunnels project has named its TBM after me in recognition of my commitment to skills and diversity in construction. My late father would be chuffed. I’ve been lucky to support some amazing organizations throughout my career and particularly reveled in leading the Construction Youth Trust, developing its programs and helping it clean the windows between young people, their communities and construction,” stated Townley at the event.

He continued: “The Covid pandemic has not helped our young people – some lost their jobs and others just never got a start. It is projects like National Grid’s London Power Tunnels and their fantastic work with organizations like MyKindaFuture that have really helped in inspiring young people and their communities to understand what the world of construction and infrastructure can offer them in jobs and careers and give them hope.”

“Bravo to all those involved who, during these tough times, have ensured that they continue to support the communities in which they are building critical infrastructure. I’m excited to see what the future holds for London Power Tunnels,” added Townley.

In order to reaching to a 35m depth and providing the work for launch in the next few weeks, the working process is currently underway after delivery of the TBM to site.

Despite commencing the work on site in March last year by Hochtief Murphy, the estimated date for completion of this project is in 2026.

Commencing the next planning phase of Sydney Metro West