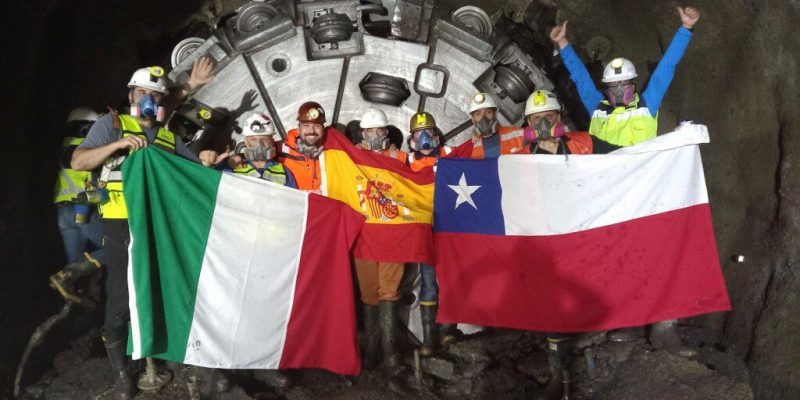 Following the progress of the tunnel boring machine (TBM) on the main tunnel with 3.3km length the construction process of the 150MW Los Condores Hydroelectric Power Project in Chile has attained a key stage.

In order to dominate the challenging ground and complex hydrogeological conditions, project client and developer Enel broke through the area by a 4.6m diameter Robbins TBM.

The upper cover of the tunnel, which was driven through the Andes mountains, was up to 450m with the geology varying from tuff, sandstone, breccia, and conglomerate with rock strength of up to 600MPa experienced. Designing to tackle with the variable ground conditions, the crossover [multimode] XRE TBM was able to switch from hard rock configuration to earth pressure balance (EPB), if required, however, it was the groundwater pressure and inflow rates that turned out to be the biggest challenge.

Due to the complicated ground conditions getting the project underway with the facilities originally scheduled to open in 2018, encountered some delays. As well as the advancement of the project that was reported to have been at a low pace in the initial stages as a result of design changes needed for the surge shaft called for by Chile’s environmental regulator.

The Robbins crossover machine that successfully overcame the issues featured a heavy-duty, centrally mounted screw conveyor for the duration of the drive. The TBM remained in a hard rock configuration with a muck chute installed, along with paddles, bucket lips, scrapers, and disc cutters on the cutterhead.

According to Robbins field service site manager for the project Omar Alvarez: “75% of the excavation was performed using the main drive gearboxes in high torque configuration (EPB or low-speed mode). We never physically changed the cutterhead or screw conveyor to EPB mode.”

Alvarez continued: “When we started the excavation, we used dewatering hoses to reduce the water into the cutterhead during the excavation. However, water pressures rose whenever the TBM stopped. During the segment ring installation, we stopped the water from draining through the rear shield drilling ports and we closed the screw conveyor rear gate. We reached more than 7bar in the cutterhead earth sensors.”

“We bored in places with greater than 5,500litres/min inflow, making back-fill grout injection behind the concrete segments a challenge. We decided not to use the grout injection through the tail shield ports but instead injected the grout directly through the concrete segment with hoses. This approach was more flexible and reduced the need for reinjections,” added Alvarez.

In accordance with Enel project engineer Riveros Puratic’s statement: “Towards the end, [the TBM] exceeded expectations. Crossover TBMs are suitable for Andean geology of sedimentary and volcanic type, where there is a great range of rock strengths and hydrogeological conditions.”

The determined date for the inauguration of the new hydroelectric scheme, which uses the available Laguna del Maule reservoir, is autumn of the coming year.