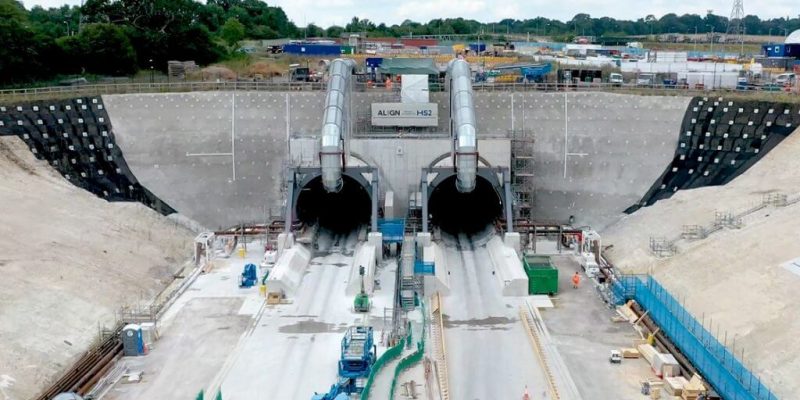 In order to take High Speed 2 (HS2) trains beneath the Chiltern Hills in Buckinghamshire, two giant tunnel boring machines (TBMs) have completed the first stage of a twin tunnel.

More than 5.8km stretch from the Chiltern tunnel’s south portal up to the ventilation shaft at the village of Chalfont St Peter, has been excavated using these two machines once they have started up last summer.

Indicated as the longest tunnels on the railway project, boring process of16km long twin-bore tunnels are expected to be done by the 170m long Herrenknecht TMBs named Florence and Cecilia are in three years.

While these machines have been designed specifically for the geology of the Chilterns, each TBM bores the tunnel, lines it with concrete wall segments, and grouts them into place as it moves forward.

Manufactured in purpose-built factories on-site at the south portal, located just inside the M25, 56,000 precision-engineered and fiber-reinforced concrete wall segments will be required for each of the separate northbound and southbound tunnels.

Operators of these TBMs are HS2 Ltd’s contractor Align, a joint venture of Bouygues Travaux Publics, Sir Robert McAlpine, and Volker Fitzpatrick, whereas they have so far installed a combined total of more than 20,000 separate segments, each weighing around 8.5t.

The location of benefiting almost 2.7m3 of extracted material during the construction of the tunnels will be landscaping on the south portal site.

Elsewhere on the project, diaphragm walling has been n completed on the tunnel shafts. There are four ventilation shafts and one intervention one, with 3km between them.

Presenting ventilation and emergency access to the twin tunnels, the shaft with 78m depth at Chalfont St Peter will be covered by a headhouse designed to resemble local farm buildings. The depths of the other shafts range from 35m to 65m.

According to HS2 Ltd project client David Emms: “The Chiltern tunnel will take HS2 underneath the hills and safeguard the woodlands and wildlife habits above ground as well as significantly reducing disruption to communities during construction and operation of the new railway.”

He continued: “It’s great to see how much progress has been made by Florence and Cecilia – and the teams excavating the five ventilation shafts – and I’d like to thank everyone involved in getting us this far.”

The estimated time duration for tunneling the north portal by Florence and Cecilia is about two and a half years.

Last year delegates at NCE’s Tunneling Festival heard that HS2 Ltd’s tunneling work under the Chiltern Hills was ahead of schedule.