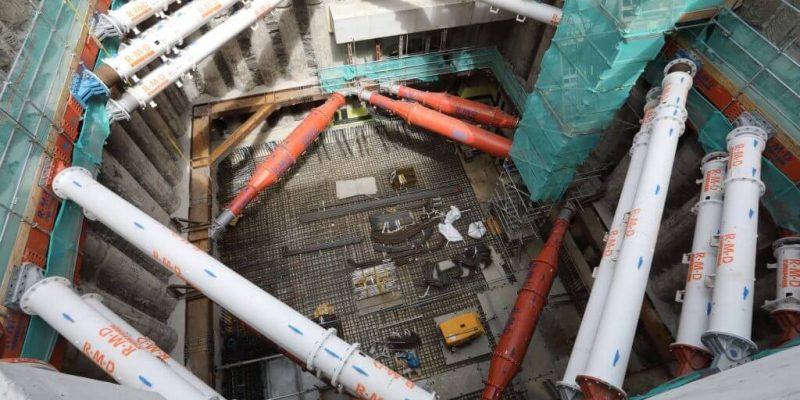 To create space for the new High Speed 2 (HS2) station at Euston, a new traction substation and a cabling and ventilation tunnel that will connect to the Northern line have been built.

HS2 Ltd’s station contractor, Mace Dragados JV (MD JV), has dug out the box that will be home to a new traction substation (TSS) and formed a connecting tunnel with two sections for cabling and ventilation systems.

The TSS at Euston will provide electricity for the Northern line. It will also provide a new ventilation system to ensure that the line’s tunnels remain cool for the safe operation of trains – and make journeys more comfortable for passengers.

As explained by Mace Dragados JV senior project manager Rob Williams, the relocation of the substation is necessary because the existing TSS – a former Transport for London (TfL) station entrance that was opened in 1907 and later used to house ventilation equipment – sits in the footprint of the new Euston station.

To relocate the TSS, HS2 Ltd is building a replacement on a side street 70m to the south of the station. A 20m deep box has been constructed by MD JV to house the new TSS, which will be three stories below ground and four stories above.

The box is made up of 104 interlocking piles. Of these, 92 piles are 1,200mm in diameter and 27m deep and others are only 7m deep to hold back weaker material, Williams explained. This bottom-up excavation method for the box works with the sequencing of the tunnel.

Earlier this month a 20m by 20m, 1.5m thick base slab was poured with 500m3 of concrete. It’s the biggest pour that has been done at HS2 Euston so far, Williams noted.

The new TSS will be connected to the London Underground’s existing ventilation network via a 93m long, 6.5m diameter sprayed concrete lined tunnel that runs under the HS2 construction site.

Byrne Bros is installing the reinforced concrete works, Cementation Skanska installed the piles around the outside, Careys did the excavation of the box, and Joseph Gallagher constructed the tunnel. Mott MacDonald is the TSS project designer.

At another construction site, the MD JV team have sunk a 20m deep temporary shaft. The shaft, which is housed under an acoustic shed designed to reduce noise impact from the works, enabled them to construct the new tunnel.

The shaft is split into two sections. The top 10m section is formed of caissons, while the bottom 10m section which domes into a bigger chamber is formed of sprayed concrete lining. The weaker granular material at the top of the shaft has made these two techniques necessary, noted HS2 Ltd Euston project client director Andy Swift.

“What we’ve got here is some made ground through to Thames gravel deposits and then we go into the clay. You don’t get into the clay until about 15m to 18m,” he continued.

“We chose a caisson – where you have a cutting edge and you fill the void with bentonite and then you put segments on top and you jack it down, excavate the bottom and that stops everything from coming in. Once we got into the clay, we then removed the bentonite from the annulus and then grouted that up to hold it in place. Then we went with a more traditional underpinning technique. And then we built the shaft out at the bottom.”

The sprayed concrete lining also gave the team the flexibility to change the shape of the tunnel, Williams added. “We were able to open up the shaft to allow for a further two meters [of excavation] which accommodated the tunnel eye.”

Construction was temporarily forced to a halt when a cargo ship got stuck in the Suez Canal and caused an industry-wide shortage of steel fibers, which held up the sprayed concrete lining. After consulting with TfL, HS2 Ltd, and its supply chain, the JV decided to replace the fibers with mesh reinforcement.

The shaft was completed in August 2021 after four months of construction. As it sits in the footprint of the new station, the shaft will eventually get backfilled when the tunnel is kitted out.

Once the shaft was built, the team formed the main tunnel and a smaller tunnel. The smaller 27m tunnel, known as an adit, connects to the existing TfL network. The longer 66m tunnel connects to the piled box. A reinforced concrete wall runs down the center of both tunnels to separate the cable and ventilation routes.

The tunnel was excavated with an 8t telescopic excavator, while a gantry crane was used to lift materials out of the shaft.

Once the team finished the large tunnel, it started on the smaller one. But then it ran into an unexpected problem, A Thames Water asset that came close to the tunnel route. As a result, the tunnel height had to be reduced in places.

“Once we looked at our ground movement, we felt a lot more comfortable with reducing the diameter of tunnel two to reduce the impact on neighboring assets,” said Williams.

Commenting on its shape, he said: “It’s gone from big to small, it curves around the outside and it lifts up in gradient. It’s a really complicated detail that everyone had to pull together to deliver.”

He added that digging the tunnel had been a challenge in general because it was done so close to other sensitive assets and the Northern line, which remained operational at all times.

The tunnels were then coated with a primary sprayed concrete lining. After applying to waterproof, the team reinforced the tunnel with steel and concrete to give it the strength and structure needed ahead of the construction of the HS2 station that will be taking place above it.

“The density of the reinforcement is fairly significant,” added Williams, “and that’s because the High Speed 2 [Euston station] basement will sit directly on top of the tunnel that we formed.”

With the tunnel and excavation works at the site now complete, the team will work on constructing the below and above-ground structures for the new TSS.

The box will then be fitted out with the necessary equipment and connected to the Northern line. Once the new structure is complete, the existing TSS on Melton Street will be demolished. Alongside the new traction substation, HS2 will deliver a capacity upgrade to Euston underground station ticket hall as well as a new bus station.

The team started on site in April 2021. The main civil and structural works will be finished next year. The architectural fit-out and mechanical, electrical, and plumbing works are expected to be finished by the end of 2024. 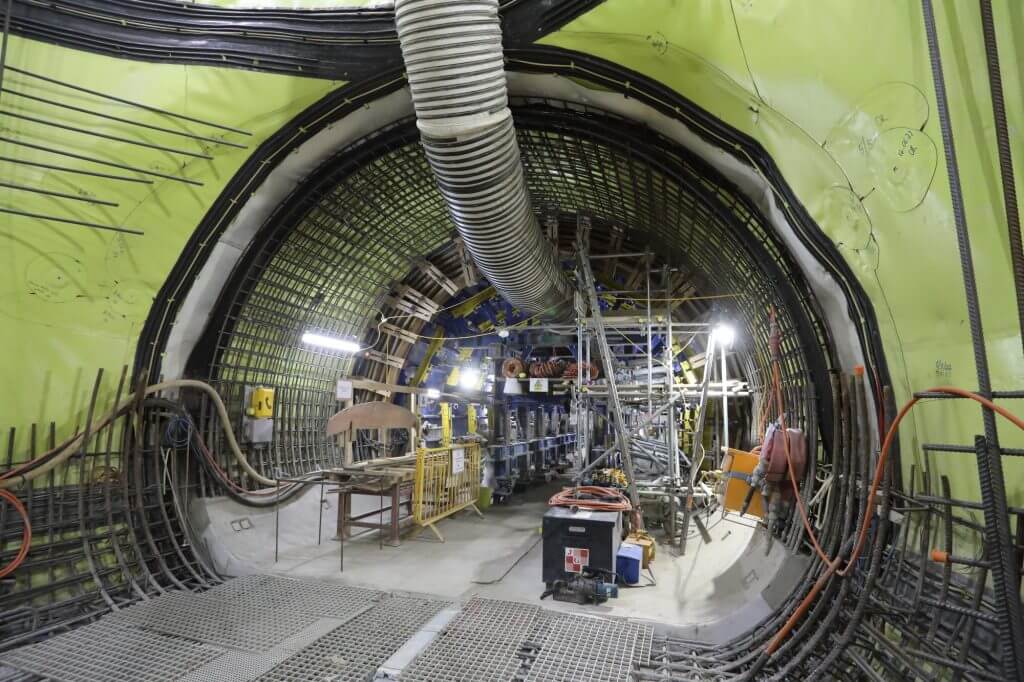 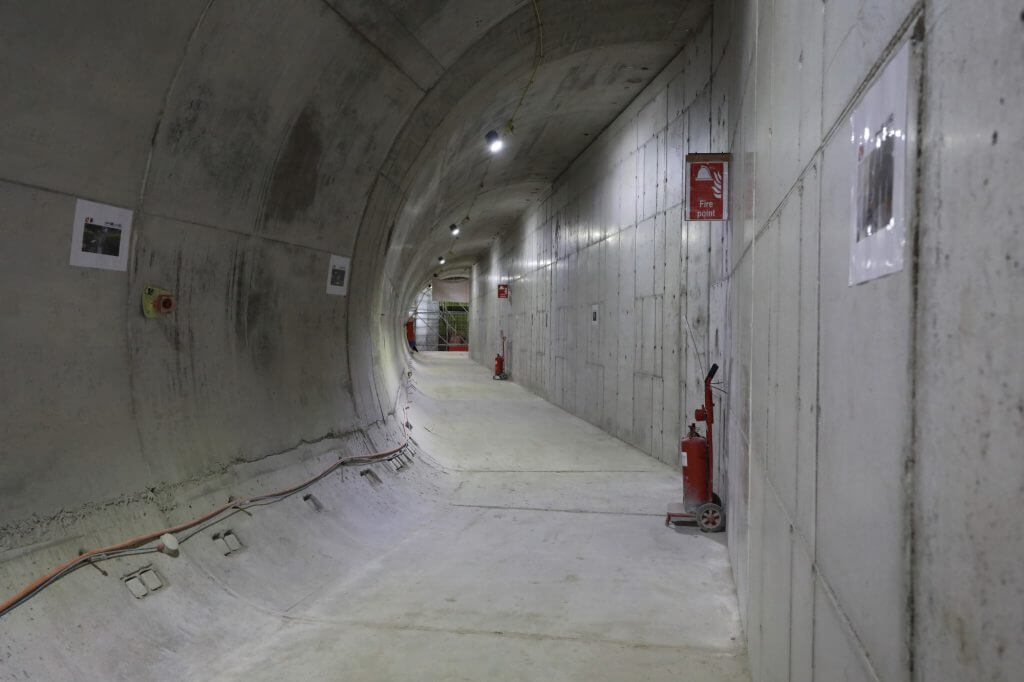 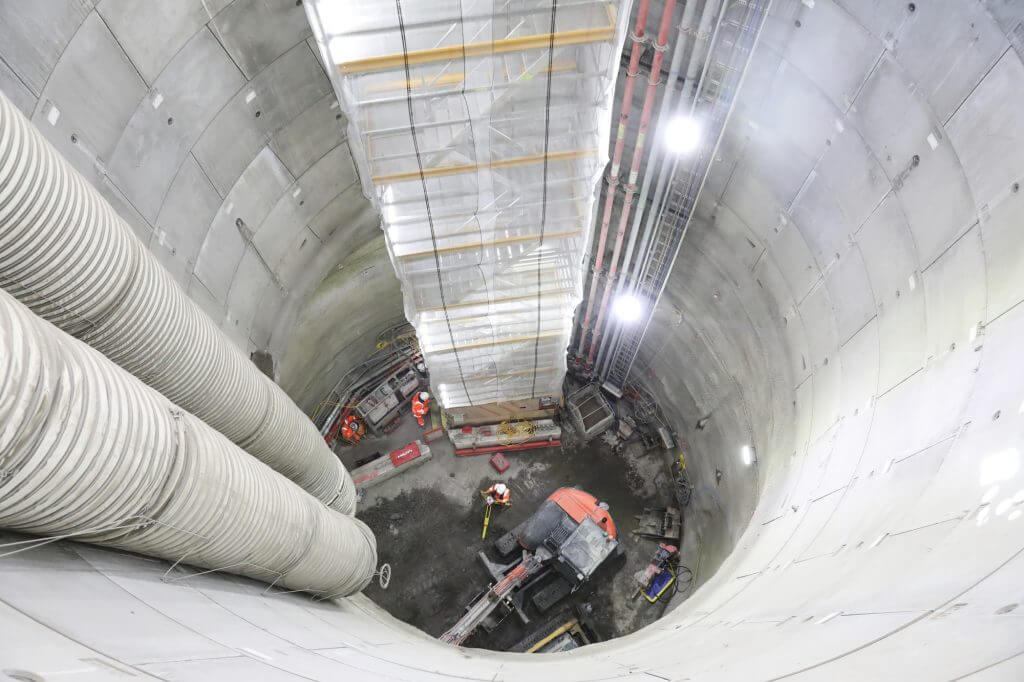 HyperTunnel to Debut at the World Tunneling Congress

Complex Operation for Rescue of TBM from Under the Sea