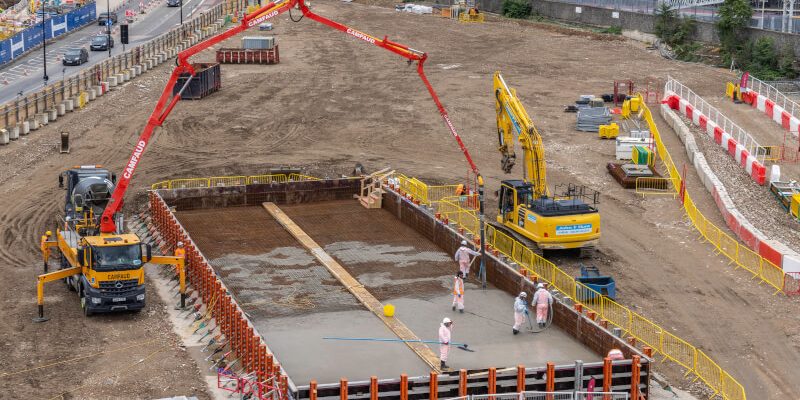 In order to supporting polymer silos used for future piling works at the north of the HS2 Euston station site, the EFC, supplied by Capital Concrete, has been used as a foundation slab, whereas this foundation is temporary and it is due to be in use for two years, and historically would have been constructed with a more traditional cement-based concrete.

While construction of net-zero by 2035 is HS2’s aim, use of this product will helps achieving this goal; as well as halving the amount of carbon in the construction of Britain’s new high-speed rail line.

According to HS2 Ltd carbon manager Mark Fenton: “The project was on its way to achieving a 50% reduction in carbon emissions compared to traditional construction methods.”

He also added: “Whilst there have been a lot of examples of using low carbon concrete across the project, the scale of its use at Euston station is a huge step forward in us understanding how it can be used more widely in construction, reducing environmental impact for generations to come.”

The contents of EFC are a mixture of ground granulated blast furnace slag, pulverized fly ash and a high-alkaline chemical, rather than Portland cement, while its geopolymer binder system decreases embodied carbon by around 70%, saving 250kg of CO2 per cubic meter poured.

“The use of EFC was part of the aim to reduce carbon emissions wherever possible. This project is a hotbed for innovation, not just in the decarburization space, but generally, and we’re making sure of that by bringing on board the right supply chain partners and encouraging them to be bold with their solutions,” said MDjv program director Ben Wheeldon.

The site also cut 30 tons of CO2 by using 20-yard skips instead of the standard concrete thrust blocks for the temporary works design during removal of a retaining wall. John F Hunt also used GreenD+ Hydrogenated Vegetable Oil (HVO) for all site vehicles instead of diesel, saving around 29 tons of CO2.

Moreover, in order to providing heating for buildings above, on the Euston site, the HS2 and MDjv team have used LPG generators as a direct replacement for diesel generators, and a new piling method.