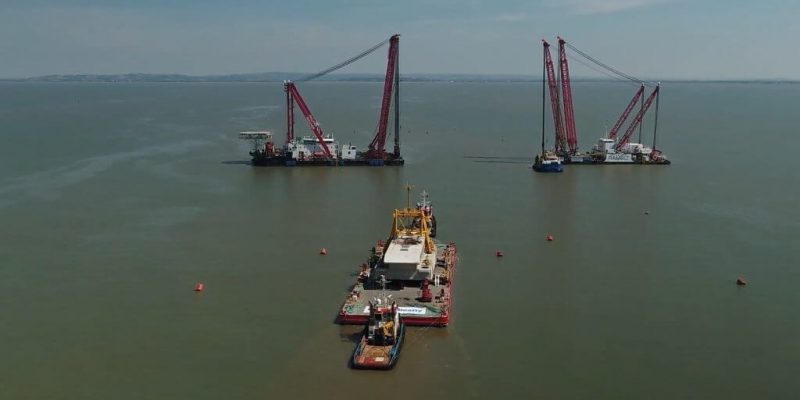 Locating at the bottom of the Bristol Channel, the last of six enormous tunnel heads for Hinkley Point C nuclear power station’s cooling water system has been lowered.

In order to face two floating heavy lift cranes, the final concrete structure with 5,000t weight was towed out almost 55km into the channel while placing the cooling water head structure onto the seabed was done by tandem work of the cranes with a combined lifting capacity of 7,300t.

Generated by Balfour Beatty, these structures have been completed to precise nuclear grade specifications and linked to 8km of underground tunnels, currently the structures will allow 120,000L of seawater to circulate every second.

Once it commenced lifting the heads, the project team kicked off a summer of complex offshore operations works for the new nuclear power station in previous summer.

This came after the completion of construction of the £20M intake heads at Avonmouth in December 2020. In March 2021, the Hinkley Point C marine works team then poured the final concrete to complete all six heads.

According to Balfour Beatty project director Roger Frost: “This is truly another incredible achievement for everyone at Balfour Beatty. When you think about the construction and infrastructure industry, you often think of buildings rising from the ground above you – but sometimes, it is what is beneath the surface, that can really make the biggest impact.”

He continued: “The successful lowering of the head structures is testament to Balfour Beatty’s unique capability in heavy civil engineering as well as our approach to tackling each complex operation with unrivaled skill and precision.”

He also added: “Not only is it a significant milestone for the Hinkley Point C project, it also represents an incredible feat of engineering by the teams that have worked in close collaboration to design, construct and place with such precision these massive structures.”

Moreover, completion of the third and final offshore tunnel for the power station’s cooling system, was reported by the project team in the first days of August.