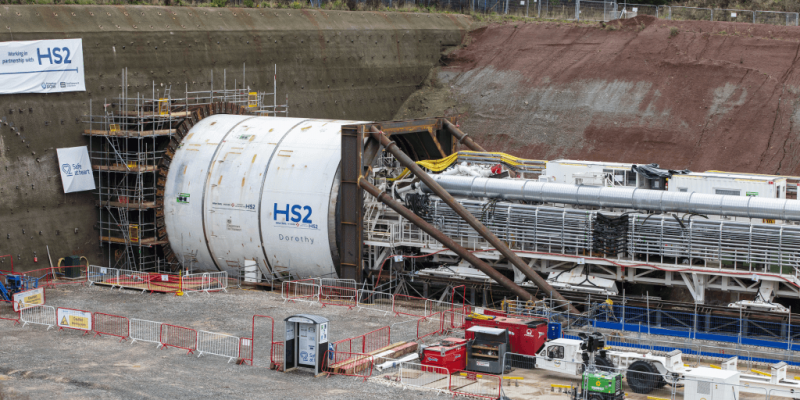 On Wednesday (20 October), Pete Waterman, the music producer and rail enthusiast revealed the TBM name during a ceremony at the Long Itchington Wood construction site which is being managed by the BBCV (Balfour Beatty Vinci) JV.

Dorothy, the 2,000t tunnel boring machine is going to make a 1.6km twin-bore tunnel beneath Long Itchington Wood. Herrenknecht has manufactured the 10m wide machine in Germany and will take nearly five months to finish the first excavation of the two parallel tunnels.

Once it breaks through at the south portal, the TBM will be brought back to the north portal to excavate a second tunnel, making the twin-bore tunnel.

“This site is one of HS2’s largest construction sites in the Midlands and is contributing to massive job creation in the region – with BBV expecting to recruit 7,000 jobs, supporting the UK’s economic recovery after the pandemic,” continued Barnett.

Mark Shepherd, the Balfour Beatty Vinci tunnel technical coordinator asserted: “This is an incredibly exciting milestone for our 150 strong team at Long Itchington Wood Tunnel, who have worked tirelessly to build the first tunnel boring machine on the northern section of the HS2 route, over the last four months.”

He also added: “As we reveal the name of this incredible, hi-tech, cutting-edge machine, it is particularly fitting that as tradition dictates, it is named after such a prolific female scientist, one that revolutionized medicine and pioneered women in the industry.”

Dorothy Hodgkin was the first British woman to receive the Nobel Prize in chemistry in 1964. Her discoveries comprised approving the structure of penicillin, and her work with insulin paved the way for it to be used on a large scale for the treatment of diabetes. She passed away in 1994 in Shipston-on-Stour in Warwickshire.

The first TBMs on the HS2 scheme that are going to excavate the 16km long tunnels below the Chilterns hills have driven a mixed distance of nearly 2.4km and are progressing ahead of schedule.