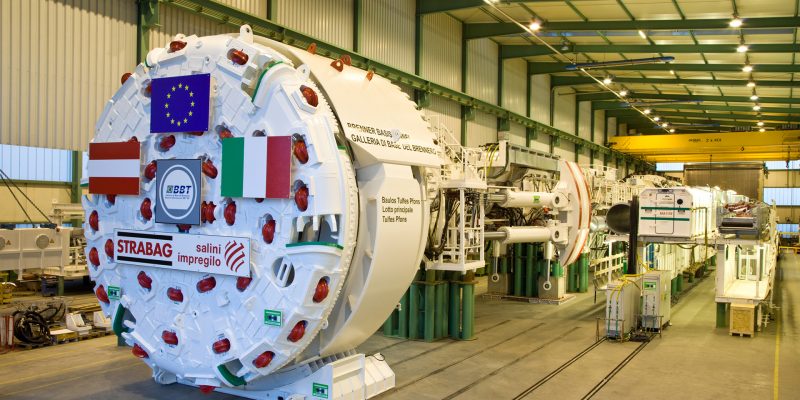 Three Herrenknecht TBMs excavating south to north on the two key tubes of the BBT (Brenner Base Tunnel) carry on to create good progress at the Italian excavation lot Mauls 2-3.

Virginia, which is a double shield 10.65m-diameter giant, excavated and lined 860m in March 2021, thereby setting a new monthly record at the jobsite. Austrian-Italian BBT SE who is the project owner have also confirmed that the average daily advance for March was 27.7m, with a daily best of 36.75m. By early April 2021, the two TMBs in the BBT main tunnels had already covered more than half of the total distance toward their lot boundary, bored majorly in ‘stable geologies’.

Contracting JV BTC S c.a.r.l (Astaldi, Ghella, PAC and Cogeis) is constructing the key tubes as well exploratory tunnels (to be followed by service tunnels) 12m under the main excavation.

BBT which has run through the central eastern Alps, crosses a challenging geology of shist, granite, quartzphyllite, and gneiss located in the collision zone of the African and European tectonic plates. For most of the alignment, the overburden differs between 1,000m and 1,500m. Rock mass permeability in some places may require to be decreased by extensive grouting; environmental rulings prohibit lowering of the water table.

Once completed, the 64km-long BBT is going to be the world’s longest rail tunnel, running through the Alps from Innsbruck, Austria to Fortezza (South Tyrol) Italy. Spaced up to 70m apart, the twin, single-track tubes will be connected by cross passages every 333m. The tunnel route is blessed throughout with particularly low gradients.