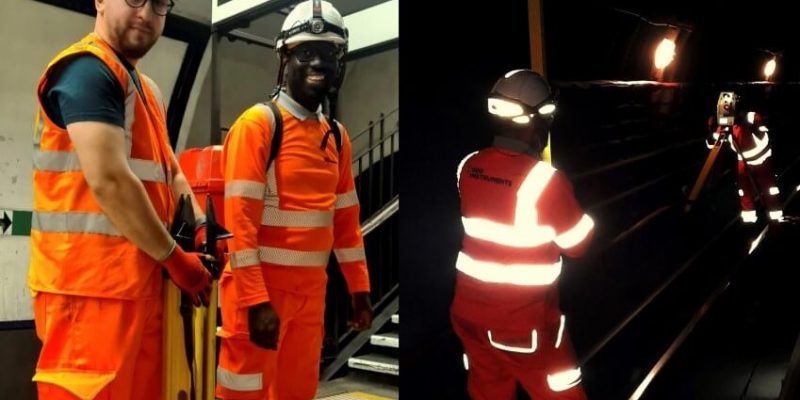 In order to rewire South London, the monitoring works form section of the second phase of the National Grid project with £1bn value, which is due to use four TBMs for completion of five tunneling drives among Wimbledon and Crayford.

The commencing phase of the large-scale project for constructing cable tunnels with 32.5km length below heavily expanded parts of the city was with the section running between Brixton and Wimbledon.

Due to the last passing path of the TBM’s, that was beneath a diversity of London’s available infrastructure, including the Northern Line, this journey needed special intensive monitoring by the Geo-Instruments team.

Teams worked through the night to undertake precise leveling and 3D total station surveys over 60m lengths of both London Underground tunnels near Clapham Common. Directly following the TBM passage, a track geometry survey was also performed on 100m of tracks in both tunnels.

Geo-Instruments are presenting a full monitoring package for the whole of course in the new LPT2 tunnels, comprising automated and manual solutions and also specialist data visualization software.

Following that in December 2019 the Murphy Group and Hochtief were granted a joint venture contract with a £400M budget, in May the TBM Edith arrived at the LPT’s New Cross site with tunnel boring implemented by these groups.

Although another landmark has been achieved for this project because of launching its second TBM Christine (is used to excavate the tunnel from Hurst to Crayford) in July, the LPT2 seeks the success of the original London Power Tunnels project (LPT1), north of the Thames, which involved building 32km of tunnels and two new substations between 2011 and 2018.

The commencing date of the construction process on LPT2 was March 2020 and the overall project is scheduled to be completed by 2026.