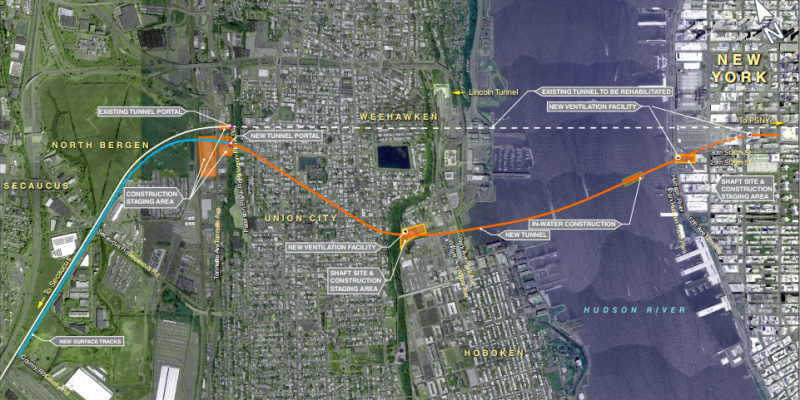 On 28 May, the Gateway Development Commission hailed the long-awaited release of FEIS (the Final Environmental Impact Statement) and ROD (Record of Decision) on the Hudson Tunnel Project.

The fulfillment of the FEIS and issuance of a ROD by FRA (the Federal Railroad Administration) and FTA (Federal Transit Administration) is a key step and milestone for the project. With an ROD in hand, advanced engineering design, utility relocation, real estate property acquisition and other pre-construction activities can go ahead, with bringing the project a great and important step closer to main construction.

The several hundred-page Environmental Impact Statement document details potential effects construction of the project could have on the constructed and natural environment, comprising coastal zones and wetlands in the NJ (New Jersey) Meadowlands and the sea floor of the navigable Hudson River, and details mitigations. The survey proves the aim and need of the project: to maintain the current Amtrak and NJ TRANSIT service among New Jersey and New York and boost Northeast Corridor resiliency, reliability and redundancy by constructing a second rail tunnel beneath the Hudson River.

The Project contains building of a new Northeast Corridor rail tunnel below the Hudson River linking to Penn Station New York plus the full restoration of the current 110-year-old North River Tunnel, which was overflowed with seawater through Superstorm Sandy in 2012.  The project aims to both preserve the level of service provided by Amtrak and NJ Transit through the current North River Tunnel, and improve the general resiliency, reliability and redundancy of the rail channel among New Jersey and New York.

“The release of today’s Final Environmental Impact Statement and Record of Decision on the Hudson Tunnel Project is a significant milestone for the Gateway Program. This long-awaited step brings us much closer to beginning the critical work of constructing the new Hudson Tunnel. We would not be here without President Biden, Secretary Buttigieg, Acting FTA Administrator Fernandez, and Acting FRA Administrator Bose and their commitment to transforming our nation’s aging rail and commuting infrastructure. We are also grateful for the assistance and advocacy that Senator Menendez, Senator Booker, and New Jersey’s Congressional delegation have provided throughout this process. Today’s action is a key step forward to building rail infrastructure that will be dependable for decades to come. We look forward to working with our regional and federal partners to complete the Hudson Tunnel Project and continue to advance the Gateway Program in order to provide much needed relief to commuters and businesses in New Jersey and New York,” stated Phil Murphy, New Jersey’s Governor.

Andrew M. Cuomo, New York’s Governor asserted: “The Gateway Program is the most critical infrastructure project for our national economy and thanks to the competent leadership of President Biden, U.S. Secretary of Transportation Pete Buttigieg and our federal partners, today we move another step closer to getting this project moving forward. The President and his team have been stalwart champions for New York from day one, and by now it should be clear to every American that this administration is serious about implementing the vision behind its bold infrastructure agenda. I want to commend Senate Majority Leader Schumer and Senator Gillibrand for championing the project all along even as it faced great opposition from the previous administration. With the Final Environmental Impact Statement and the Record of Decision behind us, we look forward to working with the Biden Administration and our partners to get the Gateway Tunnel Project completed.”

He continued: “Completion of the FEIS and ROD is a huge milestone for the Hudson Tunnel Project that has been years in the making,” said the GDC Commission Co-Chairs Steven M. Cohen, Balpreet Grewal-Virk and Vice Chair Anthony Coscia. “This is a project of true national significance and we thank our Federal partners – President Biden, Secretary Buttigieg, Deputy Secretary Trottenberg and Administrators Bose and Fernandez, along with Senator Schumer, Speaker Pelosi and our other Congressional champions – for the extraordinary dedication of resources and commitment to completing this process quickly. The Record of Decision opens the door on a new phase of work to advance the new Hudson River Tunnel to full construction, improving reliability for riders and supporting thousands of good paying jobs in the region and across America.”

“The completion of the FEIS and issuance of the ROD by the FRA and FTA represents a crucial step forward for the Hudson Tunnel Project, which will directly benefit NJ TRANSIT customers with more reliable and resilient rail service along the busiest rail corridor in the nation,” said NJ TRANSIT President & CEO Kevin S. Corbett. “Combined with NJ TRANSIT’s Portal North Bridge Replacement Project, which continues to advance and remains on track for a construction award by the end of this year, we’re positioning the entire Northeast Corridor to safely and reliably meet the demands of NJ TRANSIT customers for generations to come,” added Andrew M. Cuomo.

Amtrak’s President, Stephen Gardner declared: “We join our colleagues and partners in celebrating a Record of Decision on the Hudson Tunnel Project – a critical milestone that, now reached, moves this important project ever closer to the start of construction. The Hudson Tunnel Project will improve resiliency and reliability in the heart of the Northeast Corridor, positively impacting the lives of thousands of daily commuters and intercity passengers. Along with the expansion of Penn Station New York, the Portal North Bridge Project and other improvements, the Hudson Tunnel Project is an essential and long overdue first step toward replacing the existing configuration with a fully integrated, modernized 4-track railroad. We thank Secretary Buttigieg and Deputy Secretary Trottenberg, as well as Senator Schumer and our Congressional champions whose continued support has been instrumental in reaching this milestone.”

The Hudson Tunnel Project, along with the Portal North Bridge, and other improvements is an essential element of the broader Gateway Program to expand Northeast Corridor capacity in the most crowded section of the NEC, between Newark, New Jersey and Penn Station, New York.