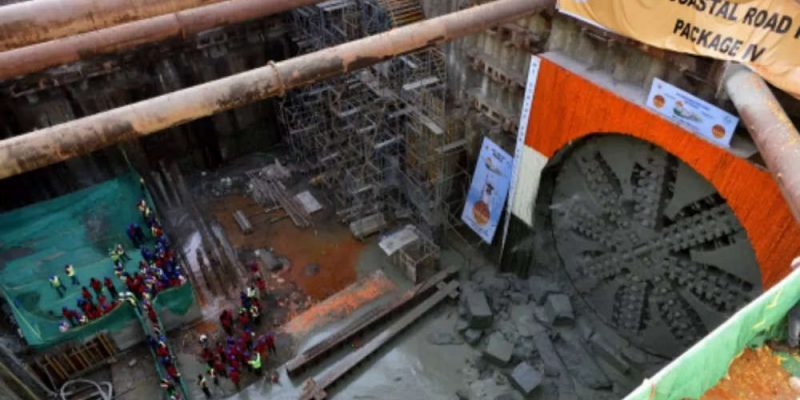 Excavation process of the first of two tunnels, which are going to form part of Coastal Road Project with US$1.6bn value (a roughly 29km freeway running alongside Mumbai’s western seafront), has been commenced using India’s largest-diameter TBM.

In accordance with local authority Birhanmumbai Municipal Corp’s (BMC) announcement, the process has been started on 10 January while currently 20%of it has been completed.

In January 2021, the slurry TBM Mavala with 12.19m-diameter, manufactured by China’s CRCHI, was started up and arrived on site in truckloads in April 2020. Contractor Larsen & Toubro launched the machine from Priyadarshini Park and it holed through exactly a year later at Girgaum Chowpatty after mining through complex geology comprising basalt (200MPa), breccia, and shale.

The crossing paths of this machine were 70m beneath Malabar Hil (rich celebrity’s locations) and a short stretch among Malabar and Girgaum at a depth of roughly 20m under the shore of the Arabian Sea. In order to begin the digging process of the second tube, the intended machine now is due to be taken back to Priyadarshini Park. The indicated twin tunnels with 3.4km length and located at depths of between 20-70m beneath the ground, will be linked by 11 cross-passages and have three traffic lanes each.

Following the completion, advantages of this project will comprise of smoothing the travel between Mumbai’s south and north suburbs, bypassing the city center, and reducing journey’s time duration for thousands of commuters who currently are spending three hours to travel the distance in rush-hour traffic.

While the AECOM is general consultant to the project, Lombardi was detailed design consultant.