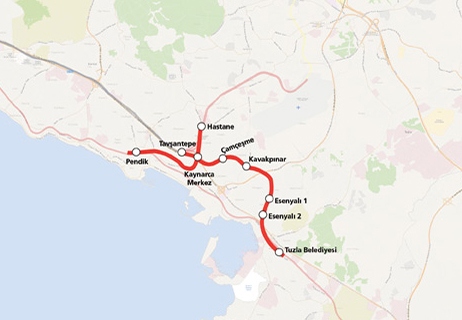 Following withdraw of the contractor company from the construction of the Kaynarca-Pendik-Tuzla Metro due to the Presidential Decision in July, currently IMM is recommencing the works on the Pendik Merkez-Kaynarca Center-Fevzi Çakmak Line, which constitutes the first stage of the rail system, within a month. Stretching to Kaynarca by 1 station, the Kadıköy – Tavşantepe Metro is going to reach the Tuzla border. Once the metro is completed, it will be integrated with 5 separate lines.

Developed to Sabiha Gökçen Airport Kadıköy, Istanbul Metropolitan Municipality (IMM) Rail System Department, continues the other end of the Tavşantepe Metro until Tuzla. In September 2022, the halo of the first stage, which remained at 33 percent, was done, while the determined time for starting the work on the Pendik-Kaynarca Center-Fevzi Çakmak Line, which constitutes the first phase, is by a month.

Due to the Presidential Decision, the tender that was made in March 2017 in the Kaynarca-Pendik-Tuzla Metro, was halted the production in the same year. Ekrem İmamoğlu IMM under the management of IMM, by providing 2020 million Euros of foreign finance in 120, restarted the construction work of the 1st phase of the line.

The scheduled date for completion of Kaynarca Station, which is due to be integrated with the 2 km long 5,1st Stage of Kaynarca-Pendik-Tuzla Metro with 1 stations, is 2025.

With expanding 1 station (1050 meters) to Kaynarca, the Kadıköy – Tavşantepe Metro will reach the Tuzla border, whereas the building of the second part, which will extend the remaining 5 stations until Tuzla, is slated to be commence after the 2024 local elections.

Additionally, the integration of 5 lines will be as:
Kaynarca-Pendik-Tuzla Metro Line, at Tavşantepe Station Kadıköy- with the Kartal Metro and the Tavsantepe – Sabiha Gökçen Metro Line, the construction of which was completed at Kaynarca Central Station, as well as the Marmaray, High Speed Train Line and sea routes at Pendik Central Station. İçmeler at the station will be integrated with Marmaray again.

Following that the integration with Tavsantepe Metro and Tavşantepe – Sabiha Gökçen Metro was attained, the operating scenario is going to be as follows:

ITA Tunneling Awards 2022 – Revealing the List of the Finalists