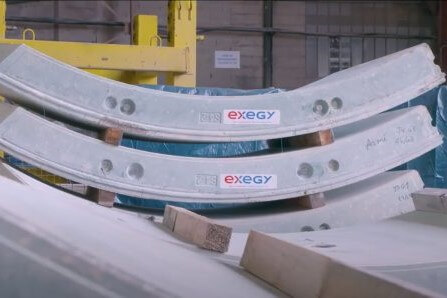 According to the claims, usage of the ultra-low-carbon concrete ‘voussoirs’, or wedge-shaped segments to line a tunnel, in a section of the metro tunnel is a first in the world.

Although the segments are due to be made up of Vinci Construction’s Exegy brand low-carbon concrete and Ecocem Ultra alkali-activated binder, the applicability of the concrete formula containing the alternative binder will be confirmed by using them in the pilot project on Line 18. So that it can be poured into casts at the pace required, and then check the finished product’s behavior in storage and overtime under operating constraints.

A professional subsidiary of Vinci Construction in concrete prefabrication, led to a concrete formula suited specifically to tunnel segments as a primary phase, which involved testing at CDB.

The second phase, industrial production at Stradal, a subcontractor selected by Vinci Construction, began in September 2021. This involved producing five full rings – the equivalent of 40 segments – sized for the project, the first of which will be used for full-scale qualification tests.

In order to create a chance to manage a real-life benchmark study on the use of new, greener material in tunnels, the use of ultra-low-carbon concrete, permanent prefabricated segments are good choices.

Since 2019, a European Technical Assessment to assure confirmation for the Ecocem Ultra alternative alkali-activated binder has been underway. October 2021 is the determined date for gaining NF EN 206/CN certification by Concretes containing this binder.

Vinci Construction managing director in charge of the major projects division Patrick Kadri said: “The environmental performance of our concrete engineering hinges on one tangible metric: its approval and effective use at worksites. The fact that Société du Grand Paris has allowed us to trial it is a wonderful opportunity to take exactly this approach.”

“We have been encouraging our partner’s initiatives, particularly the ones that reduce our construction projects’ carbon impact, since the beginning of the program. The use of ultra-low-carbon concrete voussoirs fits perfectly into our approach to reduce CO2 emissions at our worksites,” stated Société du Grand Paris member of the board of directors Bernard Cathelain.