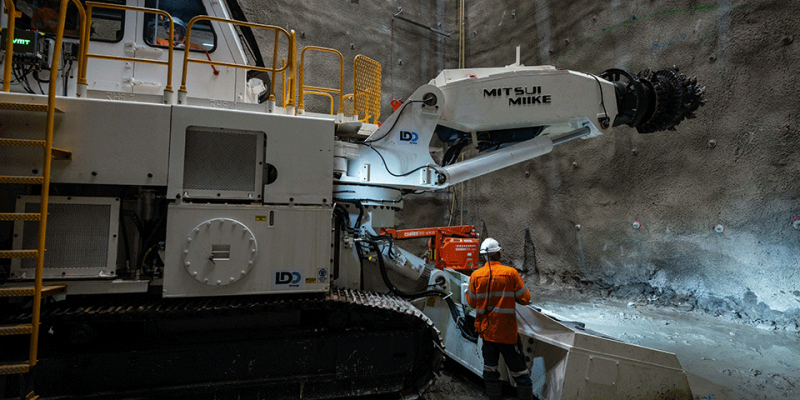 A landmark has been achieved in transformational Cross River Rail project, that is because of breakthroughs of two 115-tonne roadheaders into the cavern of the future Boggo Road station two months ahead of schedule.

Following the launching process of these mega machines from Woolloongabba early this year, they have dug around 900 meters of the tunnel each.

In September 2021, the roadheaders completed boring the Cross River Rail’s tunnels towards Boggo Road, while they have progressed about 30 meters through hard rock every week.

It marked a particularly impressive feat of engineering, with the roadheaders working as shallow as eight meters below ground at some points, including beneath live rail lines.

Despite increasing attention to the project’s massive Tunnel Boring Machines, the roadheaders are impressive pieces of machinery in their own right.

Even though the machines and the crews are anonymous heroes of this project, the responsibility of mining tunnels from Woolloongabba to Boggo Road and additionally excavating the project’s station caverns are up to them. Moreover, operation on the future Boggo Road station itself has been advanced well, while the 27-meter-deep station box is now totally dug and the walls for the station structure itself are being installed.

Plus, two of the world’s strongest tower cranes, that each capable of lifting 330 tones each the equivalent of about 47 African elephants, is included in this site and at the moment around 3000 people are active in this project, including more than 200 workers in the tunnels between Woolloongabba and Boggo Road, and 360 at the Boggo Road site.

The reasons of accelerate process in Boggo Road comprise of:

Completing excavation of Cross River Rail’s twin tunnels between Woolloongabba and Boggo Road using two roadheaders, while 20 September was the date of finishing the first one and the second ended on Friday, 24 September.

Crews are active in this project 24 hours all week long, using the 22 m length and 115 tones weight roadheaders.

Two M2480D heavy-lift luffing cranes on site are the strongest tower cranes in the world, capable of lifting 330 tones.

The future Boggo Road station, which is scheduled to be used by approximately 23,000 people daily by 2036, is due to be around 19 meters below surface level, feature 220-meter-long platforms.

Considering its assist to the area to continue boosting as world-class health, science, and education precinct, this project will open opportunities for better development at Boggo Road.

The advantages of this new underground station is going to be integrating walkways, cycle paths, Park Road station and bus services, providing improved access to both The University of Queensland and the CBD.

For further information please watch the video below and also visit this website.