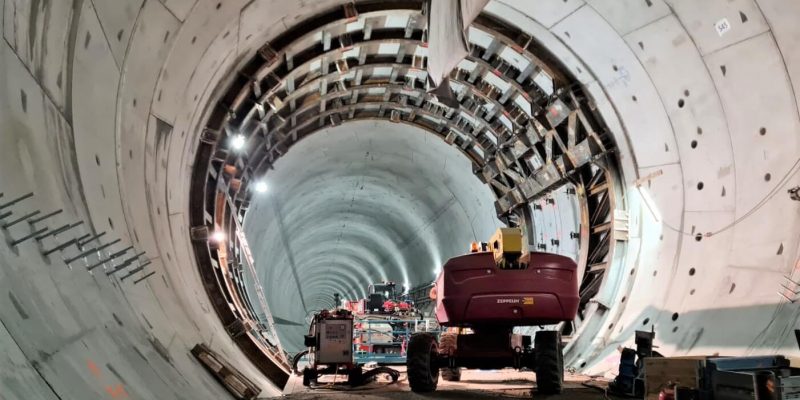 The next step in destroying process of Wyspiarka, which excavated the Świną Tunnel is extracting the back door of the TBM machine. In order to drive the machine out of the chamber and tunnel, it should be separated, while dismantled elements are carried on an ongoing basis to previously prepared storage yards. Meanwhile, 100 sets, a bridge, three cranes, and a shield, were the components of the great mole when it was transported from China to Świnoujście.

The great demolition of the Islander is mainly carried out on the Wolin Island. But these are not the only works taking place on this side of the Świna Strait. The receiving shaft where the machine finished working is still drained and cleaned.

The separating process of the diaphragm wall near the TBM receiving chamber from the side of the ramp pursues in the area of segments R1 – R16.

While on the island of Usedom, preparations are undergoing to dismantle the first casing rings, i.e. the so-called Blind tunnel, the TBM is still busy at the prefabrication plant, where reinforcement for prefabricated elements and prefabricates for structures that will be used inside the hollow tunnel is made.

Digging of holes for freezing lances at both emergency exits, drilling and gluing of the anchors required for the assembly of the brackets below the prefabricated elements, as well as prefabricating and assembly of reinforcement, formwork, and concreting of lower and upper brackets are carried out in the tunnel itself. These works are performed using a TULC machine.