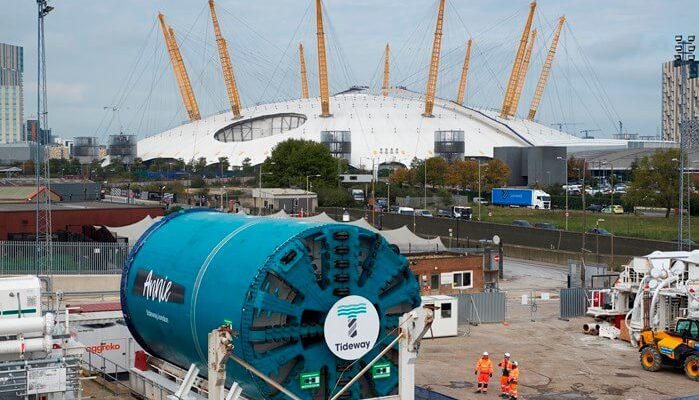 The previous year in January, Annie TBM, which has been manufactured by Herrenknecht company and is smaller than Tideway’s main tunnel TBMs at 6.4m wide, commenced its 4.5km journey to dig the ultimate connection tunnel between Greenwich Pumping Station and Chambers Wharf.

The intention is linking the Greenwich Connection Tunnel into the available sewer network and is due to transfer sewage into the main super sewer at Chambers Wharf.

Before the arrival of TBM Annie, the shaft has to be fully dug and a base slab installed. It was then partially filled with an interim cement material into which the TBM could excavate. Above this, the shaft was filled with water to match the external water pressure of the five bars. This special “plunge pool” balances the ground pressure allowing the team to tunnel straight into the shaft.

Moreover, in order to replace the cutting teeth, if required, the TBM will undergo a cutterhead inspection at the Earl Pumping Station.

Earl Pumping Station project manager Brooke Knight said: “After months of preparation it is exciting to welcome Annie into our site. Earl Pumping Station is a small and confined site and the team has worked hard to ensure we were ready for her arrival.”

The reason for naming this TBM is Annie Scott Dill Russell, the first female scientist to work at the Greenwich Observatory.

The first place of separating this machine was at a site where they have been carried by the O2 Arena from Germany ahead of being dismantled and transported via local roads. Also due to installing the 1,000th concrete ring on the Greenwich Connection Tunnel, in October current year, the TBM reached another landmark.

A joint venture of Costain, Vinci Construction Grands Projets and Bachy Soletanche, are responsible for delivering construction on the east section of Tideway.