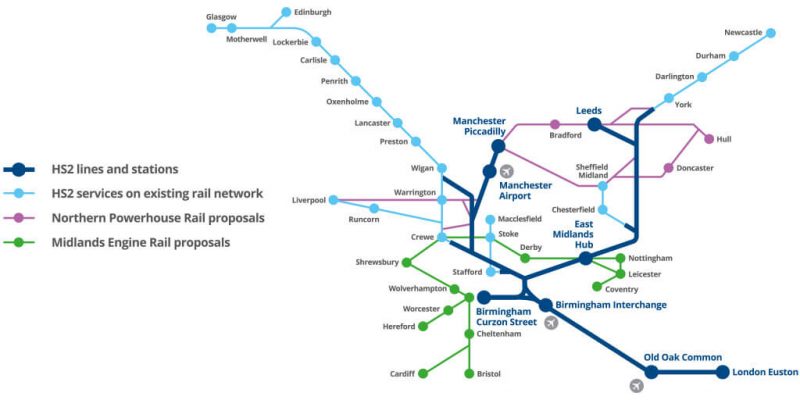 According to BBC’s received reports, the UK government is intending to scrap a much-heralded section of HS2 known as the ‘eastern leg’ which was due to stretch from the Midlands to Leeds.

Instead, the government is estimated to acclaim a new ‘common sense’ rail package for the North and Midlands that is going to provide £96bn (US$129bn) of funding for shorter routes which aim to deliver benefits more quickly and at a lower cost.

While the time period of distance between London and Leeds is 2 hours 13 minutes right now, the HS2’s eastern leg could reduce this time by 52 minutes, hence undoing this decision has been considered as dismay among people, with some calling it damaging, others a mistake that will reduce the benefits of the London to Birmingham section currently under construction.

Due to the MPs skepticism about the costs of the eastern leg, these developments come underway. Although gossips have been circulating for months about the discarding or scaling back of the Leeds route, the government is expected to announce two shorter high-speed routes that will step up from upgrading available lines: between Leeds and Sheffield, and between Birmingham and East Midlands Parkway.

The suggested Northern Powerhouse line among Leeds and Manchester is the affected line, while it is currently scheduled to comprise mostly upgrades to the existing track with some new line additions, but they will not be high-speed.

The estimated date for revealing ultimate proposals by the government is18 November.

Advancement of TBM Cutterheads to the HS2 West Ruislip Portal