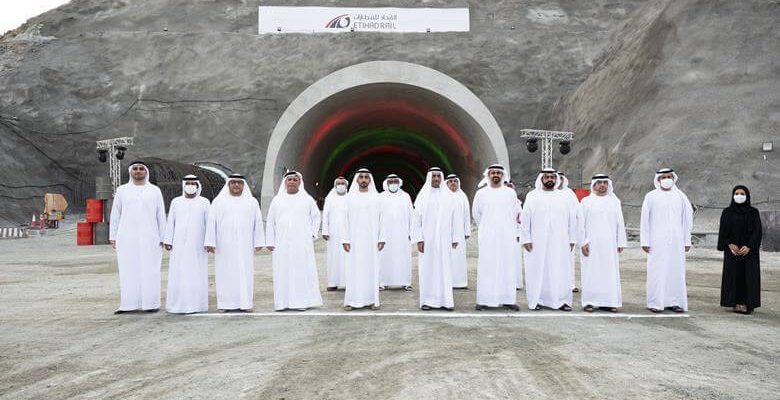 On November 2021, the project promoter Etihad Rail revealed that all of the tunnels which were needed for Stage 2 of the national rail network have now been excavated through.

The nine tunnels are totally 6·9 km, and all placed in the northern emirates of Fujairah and Ras Al Khaimah, and form part of Package D.

The rock tunnels have been bored using conventional blasting techniques, but the project promoter implemented different precautionary measures to restrict noise and vibration, deploying ‘innovative machinery and equipment’ to minimize any impact on nearby communities.

According to Etihad Rail, the boring of the nine tunnels totaled 1 million working hours and involved over 600 tunneling project supervisors and specialists. As stated, the project was finished two months before the deadline.

The Ruler of Fujairah Sheikh Hamad bin Mohammed Al Sharqi was accompanied by Crown Prince Mohammed bin Hamad Al Sharqi, and visited the construction site at Sakamkam to mark the completion of tunneling. He admired the efforts of Etihad Rail to undertake the construction without influencing nearby communities, while ‘upholding the highest measures of safety, security, sustainability, and environmental protection’.

Thanking the governments of Fujairah and Ras Al Khaimah for their ‘unlimited support’ for one of the greatest project infrastructure projects in the UAE, Sheikh Theyab bin Mohamed bin Zayed Al Nahyan, the Etihad Rail Chairman stated that the emerging rail network would play an essential role in sustaining the position of the UAE as a global and regional transport, shipping and logistics hub. He believed that as a significant element of the global supply chain, it would support the development of the emirates’ transport and logistics system, and ‘enhance the UAE’s journey for the next 50 years’.

Korea’s Longest Undersea Tunnel is Going to Open Next Month