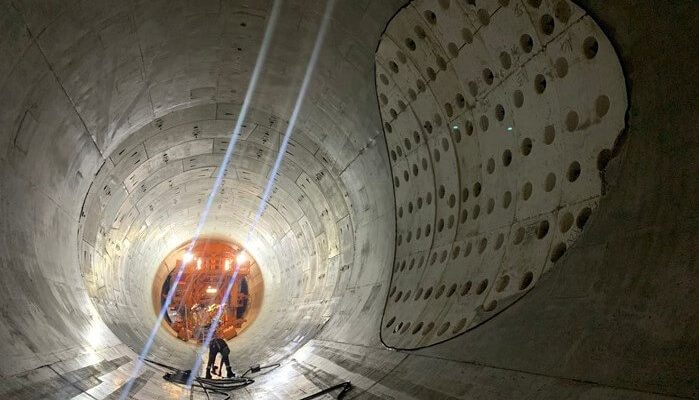 As a landmark in the project Tideway has completed secondary lining of the junction where the main super sewer meets the linking tunnel under Heathwall Pumping Station.

Among six junctions on the central section of the main tunnel that are going to be lined, this is the last one and just 300m left to line of this section of the eastbound tunnel.

In the coming weeks, the pouring process of the eastbound adit is due to be commenced, while this is the location where TBM Ursula started up from, near the bottom of the nearby Kirtling Street shaft in Battersea.

In order to fill in the basement under the steel operating deck where the conveyor mechanisms were placed during tunneling to remove excavated material for transport away from the site by a barge on the River Thames, at the underneath of the shaft, a mass backfilling operation has started.

The shutters, that are the machines that have been used in the secondary lining process of the tunnel, will return down to the tunnel at Blackfriars Bridge following the completion of the adit, in order to assist the readiness process for secondary lining the last section of central tunnel between Blackfriars and the Chambers Wharf site in Bermondsey.

The last activity of Tideway’s TBM Annie was completion of the 1,000th concrete ring on the Greenwich Connection Tunnel.

An Event for Outstanding Women in Tunneling