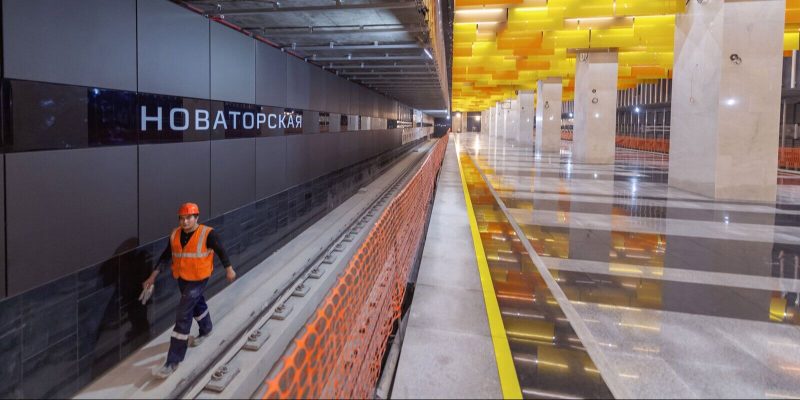 According to Andrey Bochkarev, Deputy Mayor of Moscow in the Moscow Government for Urban Development Policy and Construction, 44% of the section of the Troitskaya metro line that stretches from Novatorskaya station to Bachurinskaya is completed.

He asserted: “The work on the installation of the enclosing structures and the development of the soil has been practically completed at the site. The tunneling of the running tunnels is 94 percent complete. Active work is underway on the construction of reinforced concrete structures and a rigid foundation for the superstructure of the tracks.”

This was the first time in Russian metro construction’s background that BIM technology (electronic modeling) was totally used for designing the section of Troitskaya line from Novatorskaya to Bachurinskaya.

Additionally, as Kravtsov, General Director of the contractor company Mosinzhproekt JSC stated, the tunneling process is approximately completed at the intended, while they link the Novatorskaya, Peoples’ Friendship University, General Tyulenev Street, Tyutchevskaya and Mamyri stations with each other. Eight out of 10 single-track tunnels have already been completed.

“Driving of both running tunnels between the stations under construction Mamyri and Bachurinskaya continues. Tunnel-boring shields Daria and Evgeniya have already covered three-quarters of the planned route,” said Yuri Kravtsov.

The length of the considered path for the Troitskaya line, which is due to run from the Moscow Central Ring to the Troitsk urban, will be around 40 kilometers. Due to the accommodation of over than a million people nearby the stations and working or studying several hundred thousand more townspeople in this place, the estimated usage number of this branch will be about 100 thousand people per day.