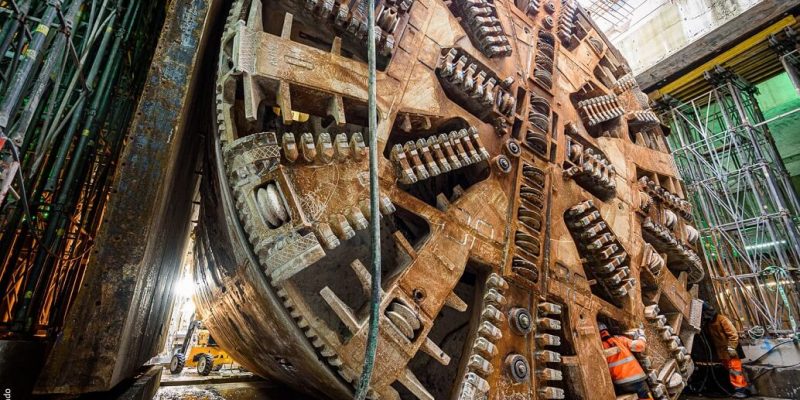 Commencing its journey in December 2020 from the Flandres shaft in Bonneuil-en-France, the first epic of the Florence tunnel boring machine ends at the Rolland work at Le Bourget by completing its 3.4 km tunnel excavation.

It took more than a year and a half for the Florence tunnel boring machine to see the light of day at the Rolland work in Le Bourget. In December 2020, this tunnel boring machine, that is named in September 2020 in homage to Florence Coquand, an engineer at the Société du Grand Paris, started to travel through the underground passages in the north Île-de-France. Following its drive near three structures and having crossed the future Le Bourget Aéroport station in a spectacular fashion at the start of 2022, on May 17, it attained the Rolland work at Le Bourget. A somewhat special boring of the walls since it was done under a metal vault, also called the bell, which allows the tunnel boring machine to be guided, but above all to maintain the pressures during its passage.

The Florence’s route was:

Due to disassembling the Florence tunnel boring machine little by little, before being transported to the current construction site on the Triangle de Gonesse in June, its tour of the track does not stop at this site. It is from the site that he is going to complete, in the fall of 2022, a final journey towards the Flandres well, where it all began.

Additionally, Line 17 of the Grand Paris Express is taking shape.

To know how the tunnels are built, discover the below explanatory video.

BBT – Breakthrough in the Brenner Base Tunnel