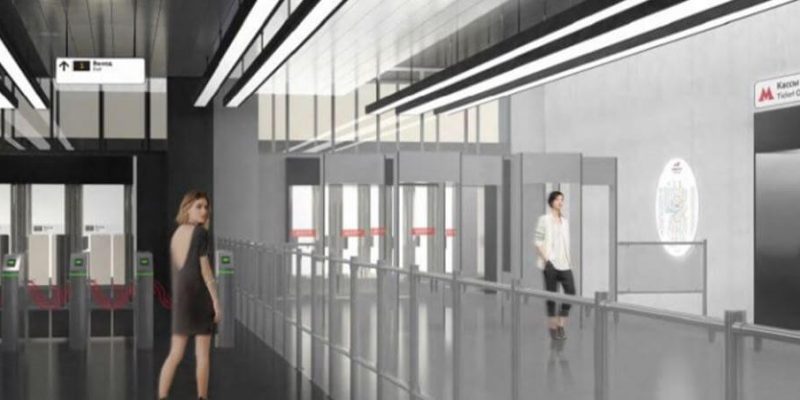 According to Andrey Bochkarev, Deputy Mayor of Moscow for Urban Planning Policy and Construction, 47% of the construction process of the Pechatniki station of the eastern section of the Big Circle Line (BKL) of the metro, excluding the interchange hub, is finished.

Andrey Bochkarev continued: “Earthworks at the station are 90% complete. Monolithic works and installation of internal walls and partitions are being actively carried out, architectural finishing and installation of engineering systems are also underway.”

Also the capital letter P is the selected architectural appearance for the station as the mayor stated.

“The columns located at the escalators and stairs of the transitional bridge will be made in the form of a composition of two letters P. At the ends of the station, compositions of inverted letters P are provided, which will also serve as station benches. Black and white colors have been chosen for Printers,” added Bochkarev.

The transition process of the BKL station to the radial Lyublinsko-Dmitrovskaya line, which is scheduled to inaugurate simultaneously with the Big Ring station will be one of the steps.

General Director of JSC Mosinzhproekt (an engineering holding – the general designer and general contractor for the construction of new lines and stations of the Moscow metro) Yuri Kravtsov specified that a large transport interchange hub will be created on the basis of the station. The Pechatniki station, in addition to switching to the light green line, will get access to the station under construction of the second Moscow Central Diameter (MTsD-2).

Yuri also asserted: “The creation of the transfer hub is taking place in difficult conditions, the site has a complex hydrogeology. The station Pechatniki BKL is being built in close proximity to the existing station of the radial line and the collector of the Nishchenko River. There is a round-the-clock monitoring of the state of adjacent structures and engineering networks in order to ensure the high quality and safety of underground work.”

Klenovy Bulvar, Nagatinsky Zaton, and Tekstilshchiki, are the stations of the composition of the eastern section of the BCL, beside the Pechatnikov station. Comprising of around 11 km, this section’s opening will improve the transport accessibility of a number of districts in the south-east of Moscow.

While the BKL metro will have more than 70 km length and 31 stations that 22 of which are already open to passengers, it is the main project of the capital’s metro construction.