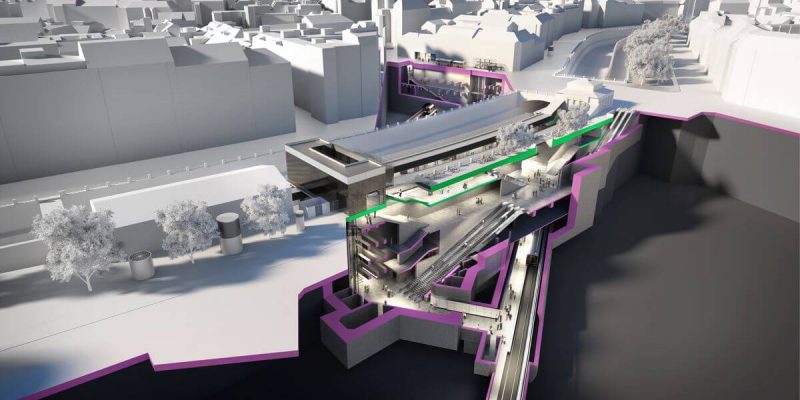 While the tunneling process has started on the new U2 line on Vienna’s U-Bahn metro, a consortium of Austria’s two largest construction companies, Porr and Strabag, commissioned the first tunneling works on the project at Matzleinsdorfer Platz, that is an indication for commencement of the largest single construction lot in the history of Vienna’s underground railway network.

The used excavation method for both of these 4km-long tunnel drives is the New Austrian Tunneling Method (NATM).

In order to the advancement of tunneling without interruption, parallel to the tunneling crew, the foundation engineering and structural engineering teams are working on extending the shafts along the metro line.

The planned time for starting work on the other end of the new U2 tunnels in the Rathaus section is this summer and following the completion of the tunnels in the vicinity of the new U2 stations a TBM will dig the first sectional tunnel from Matzleinsdorfer Platz to Augustinplatz in the 7th district. 2024 is the expected date for launching this project.

According to Porr CEO Karl-Heinz Strauss: “We are applying our cumulative know-how in metro construction. This project not only promotes sustainability after completion, but we are also protecting the environment even during the build phase. For example, we are using a tunnel boring machine powered by electricity for all five construction lots and we have significantly reduced traffic pollution.”

“The challenges made the complex urban project stand out. It is not only the City of Vienna’s biggest climate-protection project but also a team effort by three different construction disciplines. Together we are creating infrastructure that will leave a lasting mark on the city for decades to come,” said Strabag CEO Thomas Birtel.