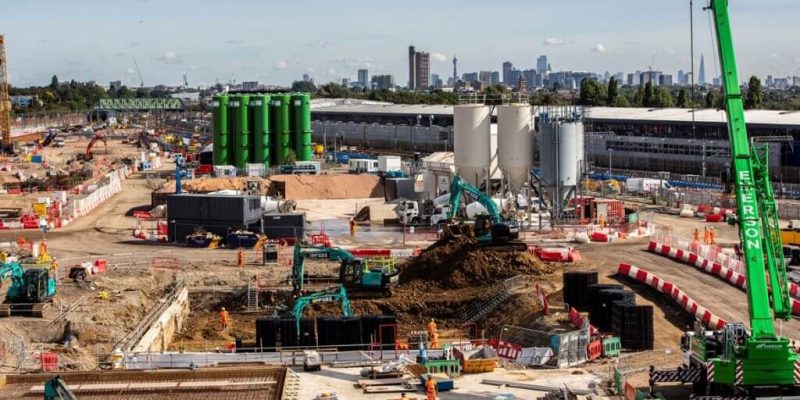 Expanded, which is a concrete frame and substructure expert, is working on the construction of High Speed 2’s (HS2’s) record-breaking Old Oak Common station box.

Once completed the Old Oak Common station with 850m length, 70m width, and 20m depth will be the largest sub-surface station in the UK, with the length of eight football pitches it will be considered to be the largest station ever built in the UK as a single project.

Expanded began constructing the station box, a reinforced concrete structure that will form the frame and base for the HS2 station building, at the West London site last month.

In order to locate 32,000t of steel and pour 190,000m3 of reinforced concrete, the Laing O’Rourke specialist trading business will dig 20m beneath the ground to extract 690,000m3 of clay.

This top-down excavation method provides the ground floor slab to be built initially with a series of mole holes allowing access for the large excavators to remove the earth from within.

Due to constructing the box at the east of the site tunnel boring machines (TBM) will be able to be started up towards Euston, cause the west of the site is where the spray concrete-lined tunnel among Old Oak Common and the Victoria Road Crossover box ends.

Around the station box an underground diaphragm wall with 1.8km length which could use the same zero trim pile technique used at HS2’s Euston approaches site will be constructed.

HS2’s deputy project client for Old Oak Common station Rob Avery said: “The start of work on the gigantic station box structure is a key milestone for the team at Old Oak Common. Work is progressing well on-site and we are pleased that Expanded has now joined us on-site as the program continues to move forward.”

“The award of this contract builds on our extensive experience in the rail sector, especially in London, and will see us work on another HS2 project where we have previously delivered bridges utilizing our modular bridges capabilities,” stated Expanded business unit leader Peter Lyons.

Balfour Beatty Vinci Systra JV (BBVS), that is HS2’s station construction partner and responsible for the construction of the new Old Oak Common station, appointed the Expanded for this duty.

According to BBVS project director Nigel Russell: “We are pleased to be working with Expanded on the delivery of the station box, which represents an integral part of Old Oak Common station. The reinforced concrete box will form the frame and base for the new state-of-the-art HS2 station building as well as the six underground high-speed platforms.”

The advantages of this project after completion for the West London superhub will comprise of 14 platforms and six high-speed platforms below the ground to house trains serving the Midlands and the North.

The first intention for constructing this station is to act as the London terminus for HS2 and then it is due to service the Midlands, Scotland, and the North and provide trains to central London and Heathrow and Wales and the West of England.

On May 2021 the pre-construction works on the site started by Expanded, while the constant construction for the HS2 station commenced in June after transport secretary Grant Shapps gave the nod to start the works.