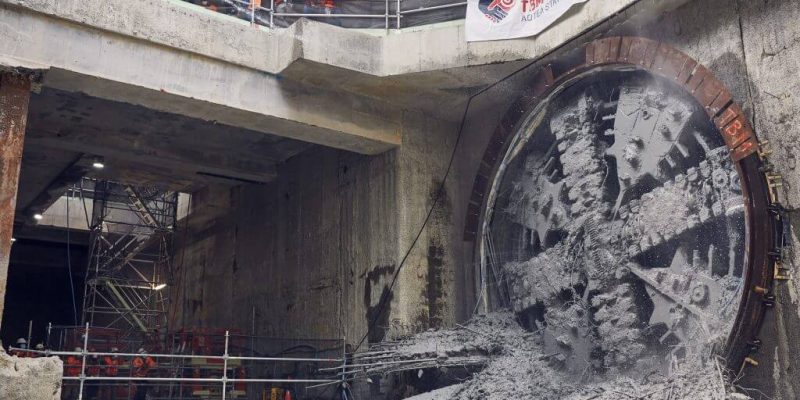 City Rail Link’s TBM (tunnel boring machine) has cut through into Aotea Station in central Auckland, marking the end of its 3.45km journey – the first of two it is going to create for the project.

Dame Whina Cooper, the 130m long TBM broke through a concrete protective wall into the station just before Christmas to join the section of CRL tunnels already constructed from the Britomart transport hub.

Operated by the Link Alliance, CRL’s main contractor, the tunnel boring machine, which tunneled up to 43m under the city center, traveled at an approx. of 15m per day and with a top speed of 32m per day, working 24 hours a day, seven days a week at its peak.

During its seven-month-long journey the machine broke through the earth, cleared spoil to the surface, and installed the concrete panels that line the tunnels.

Now, it will be returned to Mt Eden in sections and reassembled to bore the second rail tunnel, which is going to also measure 3.45km, later this year.

He argued: “This breakthrough is a great morale booster for a dedicated team working at times under stressful conditions. It gives us great confidence going into the second half of the project [in 2022].”

CRL achieved another key milestone earlier in December when it linked Aotea Station with tunnels bored from Britomart Station 15m under a busy street in Auckland.

The breakthrough under the intersection of Albert and Wyndham Streets joins twin tunnels, finished in early 2020 from Britomart Station and under Commercial Bay and Albert Street.

The chief executive also asserted that the Covid pandemic, which caused delays to the tunneling schedule over the summer because of a five-week lockdown in New Zealand, was “responsible for a lot of disruption”.

He also continued: “CRL Ltd and the Link Alliance are now assessing the impact of that disruption on construction timetables and costs. […] What is important today is that the Link Alliance has progressed a vital piece of Auckland’s transport infrastructure.”

Phil Goff, Auckland’s mayor who joined CRL workers to welcome the machine as it cut through into Aotea, reported the breakthrough as “remarkable”.

He added: “While we continue to face challenges due to the pandemic, we are making good progress on delivering this essential infrastructure.

“Once complete, the CRL will be a game-changer for the region, doubling train capacity, reducing journey times, and carrying the equivalent of up to 16 extra traffic lanes into the city at peak times.”