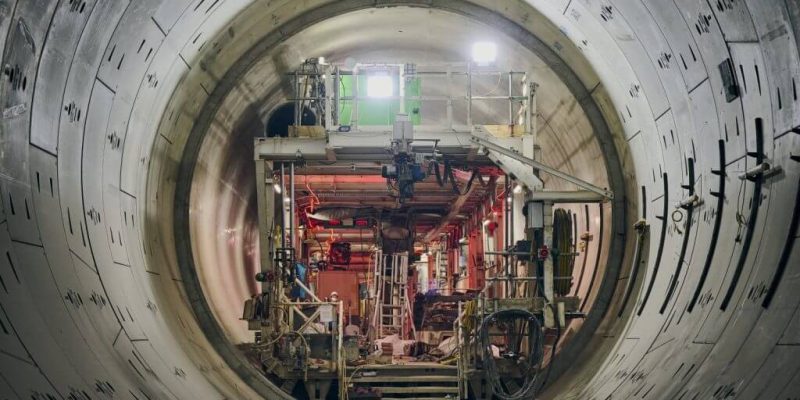 While Tideway’s first tunnel boring machine (TBM) was started up in November 2018, followed by a further three TBMs operating on the main tunnel and two on the connection tunnels, 29 April 2022 indicated as the last day of tunneling on the major scheme.

Stretching from east to west London, the currently completed 25km sewer tunnel is around 70m at its deepest. Construction has been taking place at 24 sites across the city.

The major advantage of this sewer will be dramatically decreasing sewage pollution of the River Thames and the determined date for completion of the overall project is 2025, following secondary lining, connection and testing works.

Following the broke through of a TBM into the shaft at Tideway’s Chambers Wharf, the final major connection tunnel was finished earlier this month.

The completion of tunneling brings the last section of TBM Selina’s drive toward Abbey Mills Pumping Station to a close.

According to Chambers Wharf senior project manager Mousa Khalifeh: “Today marks a major achievement after four years of our tunneling machines working away beneath the River Thames. This project is all about protecting the Thames from sewage pollution – and with the outer shell of the tunnel now complete, we’re a step closer to bringing London the healthier river it deserves.”

In order to honor this historic occasion a live music performance is taking at Tideway’s Chambers Wharf site in the tunnel itself.

The performance by London-based composer and musician Rob Lewis fuses multi-instrumental music with the sounds of the sewer construction.

“Completion of tunneling for London’s new super sewer is testament to the hard work and contributions of thousands of people and organizations, over many years – and it brings us closer to the ultimate goal of a cleaner River Thames,” Tideway chair Neville Simms.

He also added: “This performance celebrates a significant milestone in our efforts to create a more sustainable London for our growing population and we are pleased to commemorate the end of tunneling in such a unique way.”

Please watch the performance in video below.