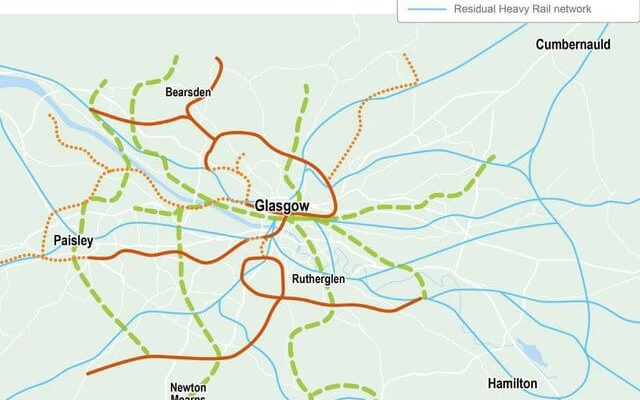 A tunnel or bridge to Mull and others linking Barra to South Uist and Harris to North Uist are to be considered by ministers to boost travel in the Hebrides.

On Thursday, it has been announced that the project is among a 45-point plan for essential upgrades to Scotland’s transport system over the next 20 years.

It accompanies plans named in an earlier stage of the STPR (strategic transport projects review) last year, such as a “mass transit” system in Edinburgh that could contain new tram lines, and a “Clyde metro” in Glasgow, which may include “bus rapid transit” and trams.

The STPR2 report, which is going to go out for consultation until April 12, also comprises a bus-based “rapid transit” system for Aberdeen, linking the outskirts with the city center such as through the A96, A944 and A956.

Improvements to the A75 and A77 to the Cairnryan ferry ports are also recommended in southwest Scotland, which could contain “enhancing overtaking opportunities, widening or realigning carriageways and improving junctions”.

Stranraer station, which remains on a harbor pier a decade after Northern Ireland ferries were switched to Cairnryan, could be relocated or upgraded.

Meanwhile many of the plans are at the proposal stage with only outline details, some are approved projects, like bypassing the landslide-prone A83 Rest and Be Thankful pass in Argyll.

The report revealed that the new fixed connections to and within the Hebrides would boost reliability and speed up journeys. It recommended “further work is undertaken on business cases to better understand the benefits, costs, and challenges associated with these options”.

As stated in the report: “These studies would consider the feasibility of replacing existing ferry services currently delivered by CalMac.”

In addition, they would “ascertain the potential savings associated with the public sector subsidies required to operate the ferry services, and involve input from communities that may potentially be affected”.

As stated, the proposal looks likely to run into opposition in Mull. Joe Reade, chair of the Mull and Iona Ferry Committee, mentioned: “We surveyed islanders on this in 2019 on this topic and the response was overwhelmingly negative, so it would seem people value their island identity.

“What they want is a reliable ferry service, dependable in typical winter weather and has space for everyone who wants to use it in the summer.”

He also added: “Rather than distracting us with grandiose plans for 20 years hence, what is really needed is a two-to-five-year plan to fix the chronically dysfunctional and expensive ferry system.”

The director of sustainable transport campaigners Transform Scotland, Colin Howden, was also skeptical. He said: “I doubt any of these suggested crossings will ever be built.

“They look as improbable as Boris Johnson’s failed Irish Sea bridge proposal.” “The Barra and Harris bridges alone would cost billions to build.”

He continued: “With only 27,000 inhabitants in the Western Isles, the benefit-cost ratio for these proposals would be extremely poor.

“The focus should be on sorting out failing ferry services rather than promoting fanciful road bridges.” “Of course, any bridge to Mull would have to be a joint road-rail bridge.

“It would surely be inconceivable nowadays to be building a new bridge only to carry cars.

“As such, I look forward to my invitation to the first direct Edinburgh to Tobermory rail service under the new ScotRail franchise,” added Colin.

There is little new information on the Edinburgh plans beyond those in the primary STPR2 report.

The new document showed: “The system would focus on key corridors of demand as well as where congestion impacts on bus services and where public transport is more limited, including targeting more disadvantaged areas where there can be greater dependence on public transport.”

“This would complement and integrate with the region’s current bus, tram and rail networks, to provide improved connectivity between Edinburgh and the surrounding communities, as well as more direct connections between communities outside Edinburgh.”

“The STPR2 recommendations support the measures set out last week in our route map to reduce car kilometers by 20 percent by 2030 and represent a major piece of work by this Government to make Scotland – all of Scotland – more sustainable,” stated transport secretary, Michael Matheson.

“This review represents a repositioning of our transport investment priorities. The focus is firmly on how transport can help us protect our climate and improve lives,” added Michael.

A spokesman for AGS Airports, which owns Glasgow Airport, stated the project “will have a transformative effect in reducing carbon emissions, boosting public transport and alleviating congestion on the M8, one of Scotland’s busiest sections of road.

“The Metro system will not only connect the city to its airport, it will also serve the neighboring innovation district and business parks opening up more jobs to people across Greater Glasgow and the West of Scotland.”

The chair of Strathclyde Partnership for Transport (SPT), Dr. Martin Bartos, which runs the Glasgow Subway, asserted: “SPT looks forward to working with Transport Scotland and Glasgow City Council on the details of this scheme which has the potential to transform the public transport network across the Clyde Valley.”

The director of capital programs for cycle path developers Sustrans Scotland, Karen McGregor, mentioned: “We welcome the recognition of the strategic role that walking, wheeling, and cycling can play in achieving the Scottish Government’s objectives.

“This helps to demonstrate the step-change in thinking that is needed to meaningfully tackle climate change, improve Scotland’s health and well-being, reduce inequalities and deliver sustainable economic growth.”