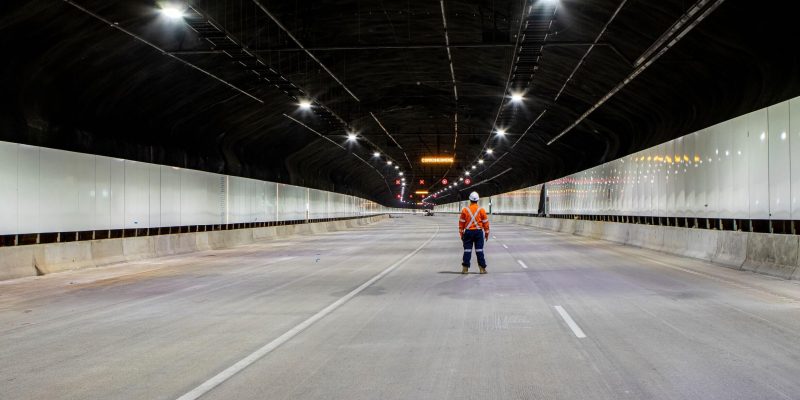 The M4-M5 Link Tunnels’ final tunneling breakthrough has been finished, concluding with a key construction milestone on the WestConnex project.

WestConnex is the greatest infrastructure project in Australia which connects Western and South Western Sydney with the city, airport, and port in a 33 km continuous motorway, mostly through an underground motorway scheme.

The mentioned tunnels are a part of the $16.8 billion project to decrease journey times as the state reopens from COVID lockdowns, and the final tunnel breakthrough on the M4 and M5 Tunnel Links marks part of the third and final stage of the project.

The 7.5 km twin M4-M5 tunnels are part of 22 km of the 33 km motorway that is going to be underground, with roadheaders carving out rock as deep as 43 m beneath the ground level.

Previously in April, roadheaders started breaking through the sandstone to link two sections of the tunnel.

Schott Charlton, the chief executive officer of Transurban stated that already, drivers are pleased by the benefits of WestConnex, with nearly 150 million journeys made on the first two stages in the last financial year.

New South Wales and Australian governments are jointly funding the project, with both the Prime Minister and the NSW premier announcing the milestone from the Sydney underground.

Prime Minister Scott Morrison asserted: “This breakthrough isn’t just for a tunnel, but it’s a breakthrough for getting people home sooner and safer and helping workers to move around.”

“As we reopen Sydney and Australia, projects like this bypass and our record $110 billion infrastructure investment are going to give our economy even more of a boost,” added Morrison.

Dominic Perrottet, NSW’s Premier stated the third stage of WestConnex is currently another step closer to forming a western bypass of the Sydney CBD.

“The Northwest Metro in north-west Sydney had been promised for decades and decades and decades, back when I was a kid at school. But we got on with the job. We built that project and we’re on to the next one,” continued Perrottet.