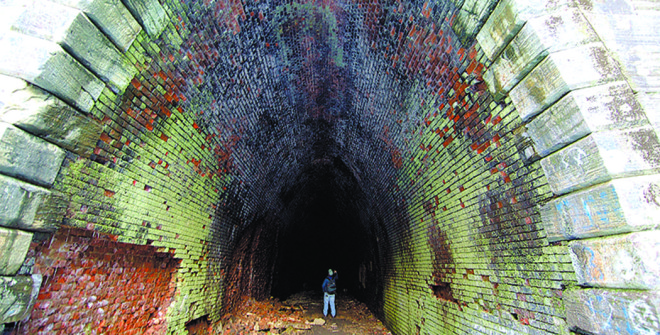 Following 18 years of preparation and renovation, the Claudius Crozet Blue Ridge Tunnel, a National Historic Civil Engineering Landmark underneath Rockfish Gap, Va., was recently dedicated. When it was completed in 1858, the Blue Ridge Tunnel was regarded as the longest railroad tunnel in North America. The nearly mile-long path through Afton Mountain now provides 6,000 linear feet of walking trails in central Virginia that connect to existing trail networks and is going to be supported by education signage and two parking lots.

In 2006, Woolpert joined the $4 million historic effort for restoration. Nelson County, Va. hired the architectural, engineering, and geospatial Company to provide master planning, building plans, and topographic survey for the design of the trail and the reconstruction of the tunnel entrance portals as well as liner and rock walls. Through three stages, the organization provided additional assistance, helping to locate and plan grant applications; assisting in bidding, hiring of contractors and construction management; and managing environmental and cultural resource documentation and structural analyses for the 162-year-old site.

Andrew Pack, vice president and business analyst of Woolpert, said the tunnel is situated 500 feet below the Rockfish Gap ridge in the state’s renowned the Blue Ridge Mountains. It is 16 feet wide and 20 feet high, with most of the walls and ceiling covered with exposed rock. Pack said the project was intended to showcase the region, its history, and facilities while promoting tourism in the counties of Nelson and Augusta.

“This has been such a cool project to be a part of, especially from a landscape architecture and civil engineering perspective,” Pack pointed out. “The topography is both beautiful and challenging, making it an ideal outdoor recreation destination. The site is also incredibly rich in history—it’s as if you have gone back in time.”

Concerning the statement made by the Claudius Crozet Blue Ridge Tunnel Foundation, Crozet was a French engineer who worked as an artillery officer under Napoleon. Since moving to America, he taught engineering in the U.S. He was also the founder of both the Virginia Military Institute as well as the Military Academy at West Point and the chief engineer of Virginia. Crozet was employed to construct the Blue Ridge Railroad in 1849, and the tunnel was completed in 1858.

In October, the Coalition for Recreational Trails honored the reconstruction of the tunnel with an award for its construction and design. In 2015, the project also received the Central Virginia Chapter of WTS International’s Innovative Transportation Solutions Award.

In September, Virginia Gov. Ralph Northam dedicated the tunnel. The successful construction project featuring the tunnel and trails is to be regarded as an active construction site in the region. The Blue Ridge Tunnel is expected to be open to the public by the end of 2020.