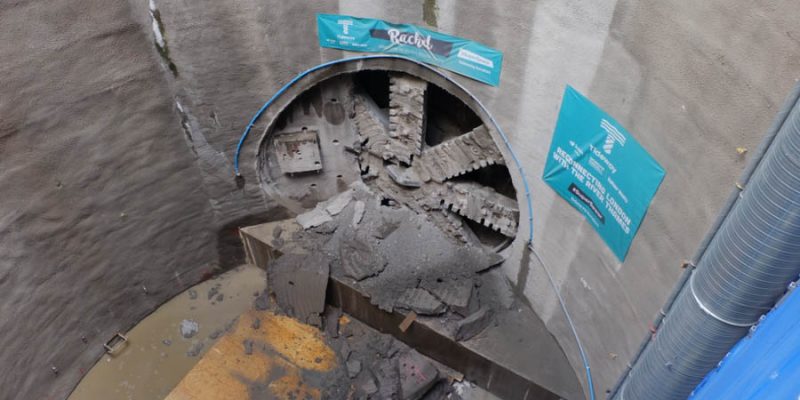 By Tunneling admin
Share
A second TBM excavating the main 25km long Tideway CSO interceptor under the River Thames in London has broken through. Breakthrough was at the end of the 7km drive of the West Contract from the launch shaft at Carnwath Road to Acton Storm Tanks for the BAM Nuttall-Morgan Sindall-Balfour Beatty (BMB) JV. The 8.8m diameter machine began tunnelling in May 2019 and excavated about 725,000 tonne of material to reach the reception shaft at Acton, the westernmost point of the Tideway route.
The breakthrough completes TBM excavations on the West Contract, after a refurbished Lovat EPBM completed the 1.1km long Frogmore connector between King George’s Park and Carnwath Road in July 2020.
“Having broken through, it is easy to forget the time and effort that goes into making these excavations possible,” said Neil Binns, Senior Project Manager for Tideway. “It is an example of the teamwork required to clean up the River Thames.”
Two of the four main TBM drives for the project now remain to be completed. An NFM EPBM is currently 6.3km into the longest 7.5km Tideway drive on the Central Contract between Kirtling Street and Chambers Wharf and a Herrenknecht slurry machine is underground but is yet to launch on its 5.5km drive for the East Contract between Chambers Wharf east to Abbey Mills pumping station, for contractor Costain-Vinci-Bachy Soletanche (CVB) JV. A final TBM, another Herrenknecht slurry machine, is also underground and preparing to launch on the 4.6km long x 5.5m o.d. Greenwich connector on the East Contract. Both East Contract TBMs are expected to launch by the end of the year.
—————————–
References
Lining shutter lowered into Tideway shaft
TBM Selina set to create final stretch of super sewer arrives by river in London
TBM for Thames Tideway Final Drive Arrives in London