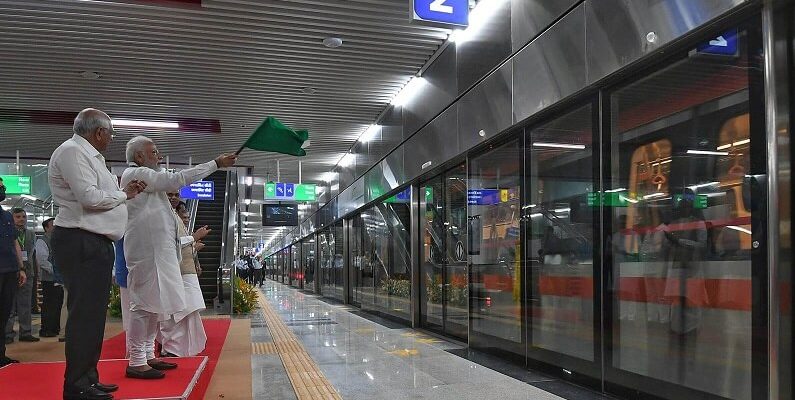 Ahmedabad metro Line 2 and an extension of Line 1 is now operational for passengers after being opened by Narendra Modi, Indian Prime Minister.

Line 2, which is 18·9 km long and have 15 stations, connects Motera Stadium in the north with APMC in the south.

Construction works began in January 2016, and following an opening ceremony with the presence of Modi on September 30, inaugurated for traffic on October 6. It is said that the trains initially run every 30 min.

The western extension of the east-west Line 1 which started for traffic on October 2, runs 12 km from Apparel Park to Thaltej, with 6·6 km underground, and takes the line to 19 km in total. 10 stations are there on the extension comprising an interchange with Line 2 at Old High Court. In this line, trains run every 20 min.

Also, an intermediate station at Kankaria East is said to be open later, and a further 1·4 km extension west from Thaltej to Thaltej Gam is anticipated to open in March 2023.

The Ahmedabad metro line 1 and 2 are working using 32 three-car Hyundai Rotem driverless trainsets provided under a 177·1bn contract awarded in November 2017. They are 2 900 mm wide with a capacity of 782 passengers and have a max speed of 80 km/h.