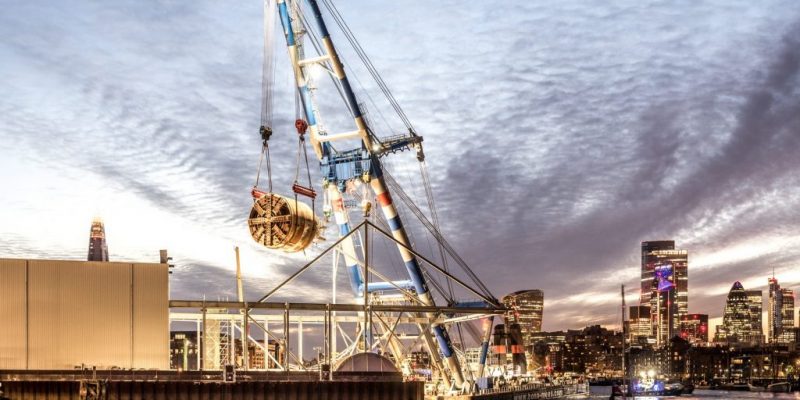 A 700t TBM (tunnel boring machine) has been lifted from a 60m deep shaft after completion of work on London’s ‘Super Sewer’.

The machine which is named Ursula, was removed from Tideway’s Bermondsey site after fulfilling 7.6km of tunnelling from Kirtling Street in Battersea.

During its journey, 4,227 concrete segments were installed to build the tunnel.

A 1,800t marine crane had to be moved in from Rotterdam to take out the TBM from the shaft at Chambers Wharf, near the Tower Bridge.

Jim Avant, Tideway delivery manager for the Eastern section explained the lift as a “huge success”.

He asserted: “This is another step towards a cleaner River Thames and is another huge milestone involving so many of our partners to ensure a successful and safe operation.

“The lifting and removal of TBM Ursula from site required months of detailed planning and collaboration across our teams as well as precise timing working within tidal conditions and in such a visible location on the river. With Ursula arriving and now departing by water, this is another example of our use of the River Thames as we deliver this major project for London,” added Jim.

As part of its drive, the Ursula machine bored more than 1M.t of spoil, all of which was cleared from site using barges on the Thames.

Also, approximately 240 barges were used to transport concrete segments to site use to form the tunnel rings.

Just as the TBM arrived in London on water, it will now voyage to her final destination through the Netherlands where parts may go on to be used in other tunnelling projects.

Once completed, Tideway will have tunneled 25km of new sewers to assist reduce raw sewage presently spilling over into the River Thames.