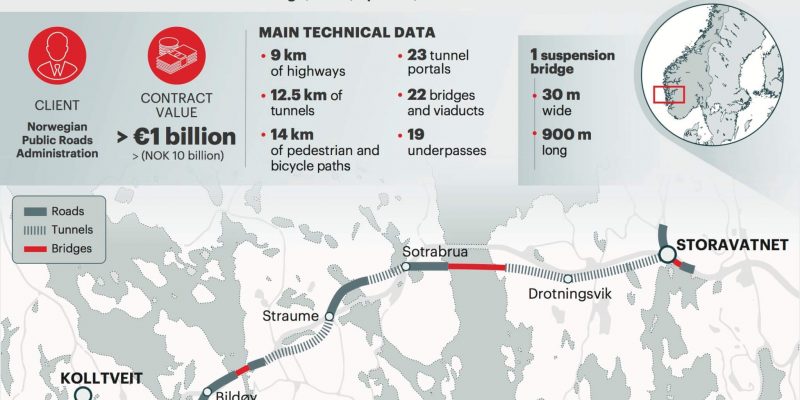 Sotra Link consortium has received a £1.7bn (NOK19.8bn) contract to construct and operate a network of highway assets in western Norway.

Covering building of nearly 10km of the four-lane road, about half of it in a tunnel and nearly 1km of it over a bridge, the program represents the Norwegian Public Roads Administration’s greatest ever deal.

Also, there are three smaller bridges included in the job, along with new car parks and public transport terminals.

“Sotra Link has delivered a very competitive offer for the implementation of the Sotra connection and takes significant responsibility and risk for the project to be carried out at the agreed time and price,” stated Kjell Inge Davik, the director of development at the Norwegian Public Roads Administration.

Pietro Salini, Webuild’s chief executive mentioned that Norway was a strategic market for the company, which was previously known as Salini Impregilo.

He asserted also: “We have been in Norway for more than 15 years and we have been able to see that the values that make up our Group’s DNA – such as innovation, sustainability, and inclusion– are founding values for the country that hosts us.”

“This sharing of values, in addition to the Norwegian government’s push to invest in infrastructure and digitalization, has us view Norway as an ideal partner, a partner we want to work with and a country where we want to invest for the long term,” added Pietro.

He also mentioned: “We want to put our expertise at the service of the country with a project like Rv555, which we are convinced will be an opportunity for us to grow along with the entire supply chain with which we will work on the project.”