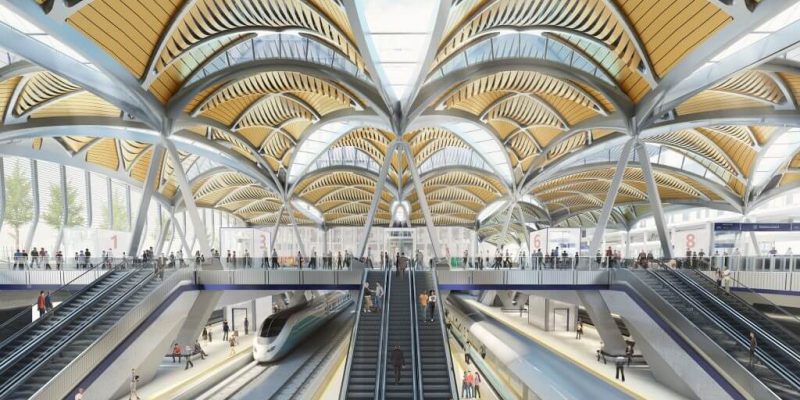 The updated plan and timeline for the completion of Euston station’s revised design, has been revealed by HS2 Ltd.

According to HS2 Ltd’s recently published Corporate Plan for 2021-2024, they have a revised concept design, which is going to be finished by the end of this year, while a precise design (RIBA 3) is due to be in place by March 2023.

In order to act to the Department for Transport’s (DfT) order, HS2’s consultants are looking at scaling back Euston Station’s design to reduce the construction time and save costs.

While in 2012 Grimshaw and Arup won the Euston concept design job, but they were substituted by WilkinsonEyre with WSP Parsons Brinckerhoff in February 2017. The designing process of Euston station, which already cost more than £100M, was commenced a year later with the return of the original team for detailed design.

A joint venture between Mace and Dragados (MDJV) remains in place as the station construction partner.

Decreasing the number of platforms from 11 to 10 and constructing the station in one stage instead of two, are the suggested design revisions being explored.

Reducing the number of platforms has been considered as a significant concern by rail professionals and in accordance with one HS2 insider prior statement to NCE having one less platform gives the service less “wiggle room” should delays occur elsewhere on the line.

Searching options to cut the number of platforms at Euston from 11 to 10 while preserving 17 trains per hour (tph) operations for the full Phase Two service, are the current agenda of HS2 Ltd despite its Corporate Plan.

The location of HS2 platforms, which will be for trains to the Midlands, the North, and Scotland, is due to be 8m beneath the ground, into a concrete ‘box’ with almost 90m width and 500m length, while enabling works at the site continue while the final designs are drawn up.

HS2 Ltd’s Corporate Plan states: “We have now cleared most of the buildings to the west of the station. We have demolished the two Euston office towers and the Ibis hotel, and sensitively excavated 18th and 19th-century burial grounds, to the west of Euston station in St James’s Gardens.”

“Work has also involved demolition of the western ramp and canopy of the existing Network Rail station. Given the extensive impact of the work, it is our priority to keep local communities and organizations informed regarding developments. MDJV has started work on-site preparing for early works and has completed installing the first 161 piles for the station’s west wall,” adds this plan.

According to the intended Corporate Plan: “Enabling works will continue to the end of 2023. Network Rail will undertake demolition works on the Euston conventional rail station through to the end of 2025. This will allow the construction of the east side of the HS2 station. Following the enabling works and design, the main station construction will start in spring 2023 with piling and excavations works.”

Determination of the key milestones for delivery in 2022 by HS2