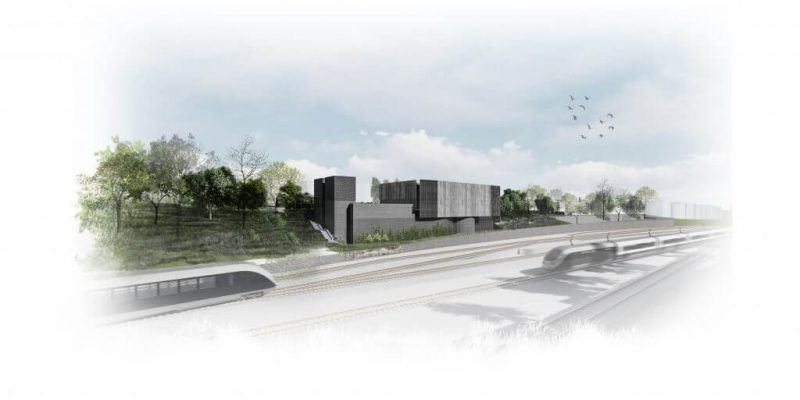 The new pictures of the designs for the Adelaide Road headhouse and vent shaft in Camden, London, have been published by HS2 Ltd.

In the summer of 2018 the primary schemes for the headhouse were revealed by HS2 and following community feedback has made some changes to the design.

Between the Chalk Farm Road and Primrose Hill Road on the Network Rail embankment area, is the location of the Adelaide Road headhouse.

The modified design has been placed far from the road, decreasing industrial street frontage, and has been adapted to be a single storey on the Adelaide Roadside. The view of this headhouse from the railway side will be a double-story building. A boundary wall is due to be run along Adelaide Road, and red or grey bricks are being considered for the final design. The ideas of the local community are seeking both options.

The materials used in the proposed headhouse design have been adapted and are now timber, metal, concrete, and brickwork. The headhouse will also be topped with a green roof and will be embedded into the local landscape with tree planting and scrub habitats. All the headhouses for HS2 through London will use similar materials, adapted to blend into the surrounding environments.

Nia Griffiths, head of consents and engagement at SCS JV, said: “This vital piece of infrastructure has been designed to complement the local surroundings, whilst performing an important function to support the safe operation of the new HS2 railway.”

“We look forward to engaging with the local community and stakeholders on this final design and getting their feedback to determine the appearance of the boundary wall,” added Griffiths.

The feedback of the local community is requested on the proposed designs, due to its assist in refining some of the design elements including the appearance of the security boundary wall around the perimeter of the headhouse.

Currently the public can access the updated design plans for the headhouse. Moreover, the images of the Chesham Road shaft headhouse, which is going to present emergency access for the longest tunnel on the HS2 scheme, newly have been published by HS2 Ltd.

Ground Settlement in Montréal Due to Metro Works