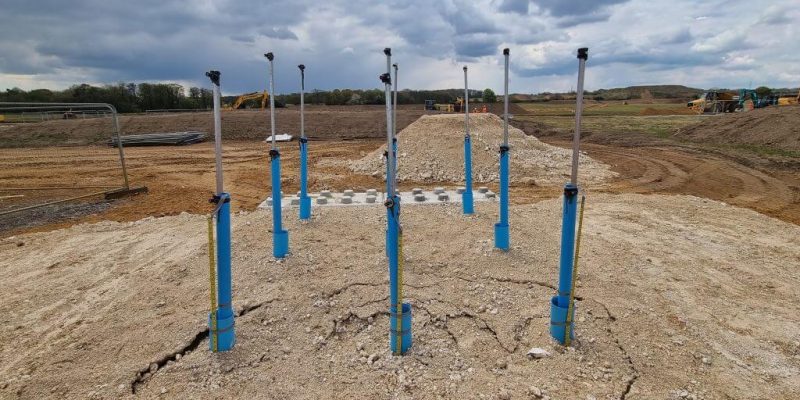 An advanced method of detecting earth movement is being tested on the HS2 project. As a key figure revealed, it could have “long-term benefits” for UK transport systems.

The Align JV is installing 2km of Sensor grid – ground-stabilizing mesh woven with fiber optic cables – in a cutting at the South Portal site of the rapid rail project, near the M25 motorway.

The product which is developed by the University of Cambridge’s CSIC (Centre for Smart Infrastructure and Construction) and geosynthetics manufacturer Huesker, uses pulses of light to discover minute ground movements.

Initially, it was put through its paces in a trial pit close to High Speed 2’s under-construction Chilterns Tunnel. Sections of Sensorgrid were squeezed between heavy-duty water-filled bags below and earth above, which were then emptied, causing the earth to shift and strain the mesh. Light signals sent to monitoring equipment picked up the movement.

It is expected that the technology could be used widely to assist in stopping landslides and discovering the formation of sinkholes, an activity which could save vast sums being spent on repair works and prevent disruption. This type of detection work is anticipated to become progressively important as climate change accelerates.

Rob Cairns, the HS2’s innovation manager stated: “Sensorgrid is a great example of how we’re leveraging HS2’s size and scale to draw on British expertise to develop a technology and demonstrate its innovative capability in the early stages of construction. This will act as a testbed for proving out a significant benefit to the operational railway, with long-term benefits in bolstering the resilience of the UK’s transport network.”

Nick Podevyn who is an innovation manager at Align – a consortium including Bouygues Travaux Publics, Sir Robert McAlpine, and Volker Fitzpatrick – mentioned: “A lot of hard work has gone into this innovation, which has been in incubation for more than a year.

He also added: “It has been an exemplar of open collaboration and working as one team to deliver the solution. It’s fantastic to see the prototype being physically tested on our site and then the technology being implemented on the live project.”

Cedric Kechavarzi, the Centre for Smart Infrastructure and Construction’s operations manager asserted: “Sensor grid opens a wealth of new opportunities to use fiber optic sensing in geotechnical applications, as it vastly improves strain transfer from the soil to the sensor.”

Align JV is delivering the C1 package of HS2, which features 21.6km of high-speed rail infrastructure at the southern end of the route, comprising 16.04km of twin-bored tunnel, a 3.37km viaduct, and five vent shafts.

Cumbrian Coal Mine Benefits the Planet