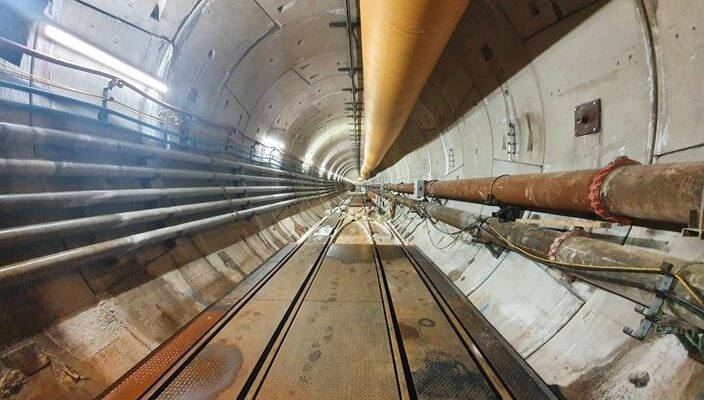 According to Tideway’s report, the TBM Annie has completed 1km of the Greenwich connection tunnel in London.

This tunnel, which has 4.5km length is due to link Greenwich pumping station to the main ‘super sewer’ at Chambers Wharf in Bermondsey. The remarkable advantages of this tunnel are providing extra sewer capacity in southeast London in order to solve the problem of sewage overflow into Deptford Creek, a tributary of the River Thames also known as the River Ravensbourne.

The Deptford Church Street site was the passing route of TBM Annie in the last days and it is currently on the way to Earl pumping station before continuing on towards Chambers Wharf.

This TBM with a 6.4m diameter is smaller than Tideway’s main tunnel TBMs and is constructed by Herrenknecht in Germany. Following sending it to the UK, in August 2019 it arrived in London, before being assembled at a location near the O2 Arena and transported to the site. December 2020 was the commencing date of its drive.

Annie Scott Dill Maunder (née Russell), the first female scientist to work at the Royal Observatory, Greenwich, was who inspired the naming of this TBM.

In order to remove material from the tunnel and carry it away from the site, for advancing the construction works of London’s super sewer, Tideway stated that the company is using the river, while the barges on Deptford Creek is used for this aim at Greenwich and this action reduces the need for hundreds of lorry journeys on London’s streets.