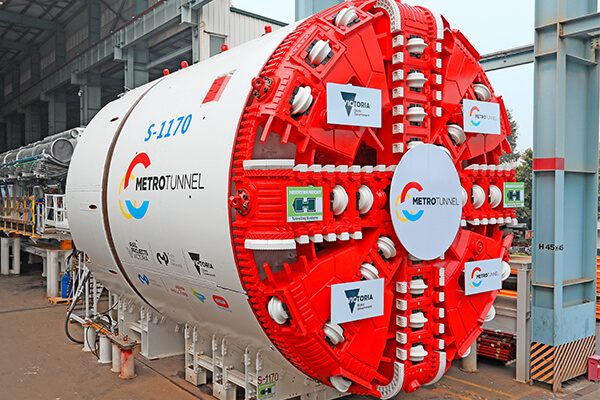 After completing the tunneling in May 2021, the four slurry TBMs which since April 2020 have been boring Melbourne’s Metro Tunnel are currently being recovered from underground.

Disassembling is happening at the 7.28m-diameter cutter heads, breaking them into smaller pieces to enable conveyance via the tunnel and returned to the supplier for reuse examination.

The four TBMs have bored at depths ranging between 12 – 40m at a typical daily advance rate of 10m every 24hrs. They have experienced irregular geology including soft soils, like Coode Island Silt, plus hard basalts under the Yarra River and in some sections of the western alignment. Along many sections of their drives, ‘mixed-face’ geologies of hard and soft soils were encountered.

Although they are disassembling the TBMs, boring is still going on in the project by road headers excavating the tunnels next to the platforms at Town Hall Station. Also, the work is continuing on 26 cross passages.

The Metro Tunnel project is going to be a metro-style, end-to-end rail line across Melbourne, with twin 9km tunnels and five new underground stations. It is going to stretch from Sunbury in the west to Cranbourne/Pakenham in the south-east. The project is anticipated to be complete by 2025.

Chinese TBM Breaks Through in Moscow