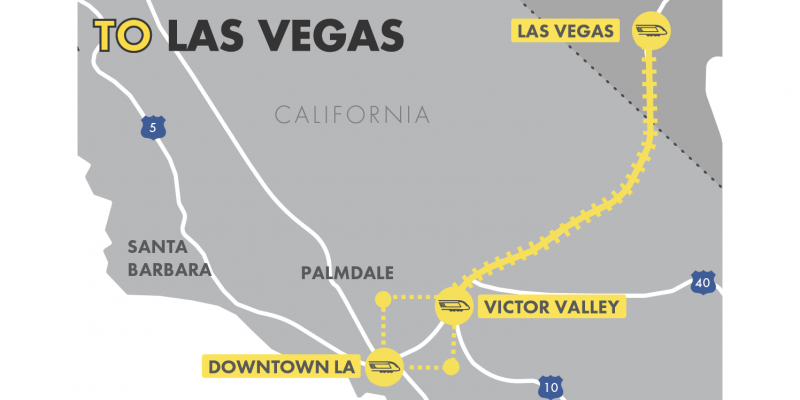 By Tunneling admin
Share
According to the website RebuildSoCal.org, plans for a new high-speed rail line that is going connect Southern California to Las Vegas are moving ahead after awarding the project another critical public funding allocation. From the Nevada State Board of Finance, the rail project (XpressWest) has won $200 million of private activity bonds. The Nevada award comes after a California committee, overseen by California Treasurer Fiona Ma, awarded the project $600 million of private activity bonds in April.
Both state allocations allow the company to sell up to four times the value of the awards as tax-exempt bonds to private investors, to increase additional funds for the transportation project. It means that the project has the potential to increase an extra $800 million from the Nevada award and as much as $2.4 billion from the California award.
On target to break ground by the end of 2020, the high-speed rail line will be constructed beside an existing government-owned right-of-way through the desert along Interstate 15. The first stage of the route is going to connect the 170 miles between Southern California’s Victor Valley and Las Vegas; expansion to Los Angeles will follow in a distinct phase.
Brightline is constructing the project, which at the present, operates the nation’s only privately-owned express passenger rail line, connecting Miami to Florida’s West Palm Beach. Ben Porritt, Brightline spokesman stated that the Las Vegas to Los Angeles project will take about three years to complete and “will create a total of 30,000 construction jobs and 1,000 permanent jobs in the neighboring states once the line is up and running.”
The high-speed line has been commended by many as a green alternative of travel between the two destinations. The route will “transform transportation in Southern California and Las Vegas for generations by providing a fast and efficient connection that gets people out of their cars, reduces traffic congestion, and decreases air pollution” said California State Treasurer Fiona Ma.
If the project goes as the schedule, by 2023 the train will be transporting as many as 10 million passengers annually from Las Vegas to the Los Angeles region in 85 minutes at speeds of up to 200 miles an hour.
Source: Tunnel Business Magazine

East-West Metro corridor back on track