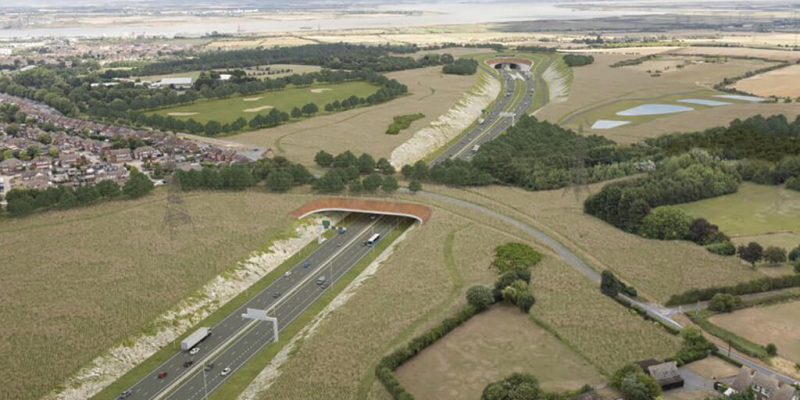 In order to apply the changes to the Lower Thames Crossing planning application £362.5M additional cost has been added to the final estimated cost of the project.

In June the intended changes to the project’s planning application have been released by Highways England, which was in regard to traffic management, air quality control, noise, and vibration, as well as the impact of the new crossing on the environment and landscape.

They have been added to the project’s development consent order application after Highways England was forced to pull its original plans following feedback from the Planning Inspectorate in November last year.

The Office of Rail and Roads(ORR), has revealed the extra costs in its annual assessment of Highways England performance.

The ORR report adds: “The main cause of the forecast total outturn increase [on] the Lower Thames Crossing scheme [is] largely due to scope changes to meet safety/environmental requirements and address scope uncertainty.”

While the raised cost of this project assumes as the largest estimated cost on any Highways England scheme, it is believed that the project is still expected to come in within its projected cost window of £6.4bn and £8.2bn.

According to the ORR report, there is a significant concern for the delay in Highways England construction of the tunnel between Essex and Kent due to revisal in the planning application.

In accordance with Highways England plans, it is going to present a new application later this year to recommence the consent process and if this request got a positive response, the construction process is estimated to commence in 2024 and the time period of this process is almost six years, hence the expected date for opening this revised road will be between 2029 and 2030.

Following completion of the original application, Palmer’s interview with NCE illustrated that he expected a new DCO application to be filed within 90 to 120 days, which would have seen the application resubmitted in March at the latest.

The failures in the planning application, did not stop Highways England’s procurement for the project.

A tunneling contract with the value of £2bn was confirmed by LTC in April 2021. The shortlist of proposers for this contract were: Bam Nuttall, Ferrovial Construction and Vinci Construction Grands Projets (BFV JV); Bouygues Murphy Joint Venture (BMJV); and Dragados-Hochtief Joint Venture (DH JV).

Late March was the date of releasing the tender documents for the two roads contracts including the £1.2bn roads north package and the £600M Kent roads section.