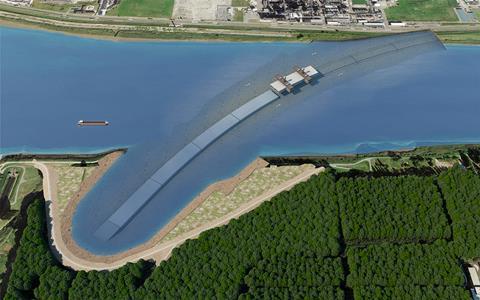 The consortium of Besix, BAM, DEME and Jan De Nul has been awarded a contract of building the 1,800 meters long Scheldt tunnel in Belgium.
In this autumn, the consortium, known as Tijdelijke Handelsvereniging Combinatie Oosterweeltunnel (THV COTU) will begin preparatory work on the €570 million project.

Since the tunnel is going to be run beneath the Sheldt River in Antwerp, it will become a major element of the Oosterweel Link project being developed by Lantis. This project will close the R1 ring road around Antwerp increasing the efficiency of the European Union’s TEN-T transportation network.
The tunnel contains three tubes, two for motorway traffic, and a separate one for cyclists and pedestrians.

Jan De Nul has announced that the method which the team is going to use is the immersed tube method of construction for the tunnel.
A total of eight elements, each weighing approx. 60,000 tonnes, will be constructed in the port of Zeebrugge, before being towed by barge to Antwerp, where they will be sunk, settling into a pre-dredged trench in the river.
Jan De Nul has mentioned in its press release that THV COTU is well aware of the obstacles that such projects bring with it in a technically difficult environment likewise the Scheldt in Antwerp. However, the partners are confident that they have the required and essential expertise and decades of experience to successfully attain the realization of this fundamental stage of the Oosterweel link project.

It has been planned to start the construction work on the tunnel by the summer of 2021.