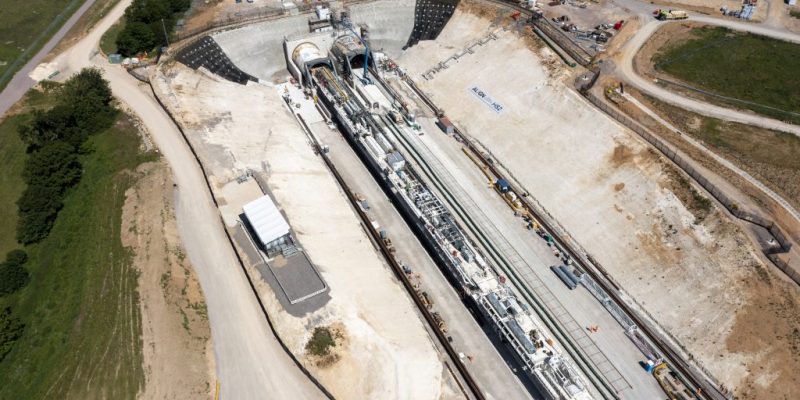 HS2 has launched Cecilia, the second TBM, from the South Portal site northwest of London after recently launching Florence TBM to bore the first tube of the 16km-long Chiltern Tunnels.

“We are delighted to be launching Cecilia…, the second of our TBMs, to dig the Chiltern tunnels. Both TBMs are identical and include innovations to improve efficiency and the safety of the environment in which the crews will be working that have never before been introduced on any previous TBM worldwide,” stated Daniel Altier, Align Project Director.

HS2 declared that regardless of Cecilia beginning second, the 2,000t machine will excavate at a slightly faster rate than her sister. Therefore, both TBMs will break through at nearly the same time. Both of them are operated by a crew of 17 and powered by zero-carbon electricity and advance at up to 15 meters per day, installing a total number of 112,000 fiber-reinforced segments that are being manufactured onsite.

The two tunnel boring machines are digging separate northbound and southbound tunnels through the chalk and flint geology of the Chiltern Hills, recognized as a section of outstanding natural beauty. Launched from the site by the M25 motorway, the machines are operated by Align, HS2’s main works contractor which is a JV including Sir Robert McAlpine, Volker Fitzpatrick and Bouygues Travaux Publics.

David Bennett, HS2 Ltd.’s Delivery Director, welcomed the news of the launch and mentioned: “With more than 16,000 jobs already supported by the project and thousands of companies big and small benefiting from contracts, HS2 is providing a major boost to the economy in these difficult times. In the longer term, this transformational rail project will help link our regions and nations and offer low-carbon transport options for generations to come.”

The last breakthrough for the 3RPORT project in Fort Wayne city